El Salvador is another example of God appointing a most unlikely candidate, but certainly His man, to lead the country. I have previously posted on similar situations in the USA (Trump), Australia (Morrison) and Brazil (Bolsonaro). God is ultimately in control of nations and He judges those that are unrighteous. Politicians take heed. 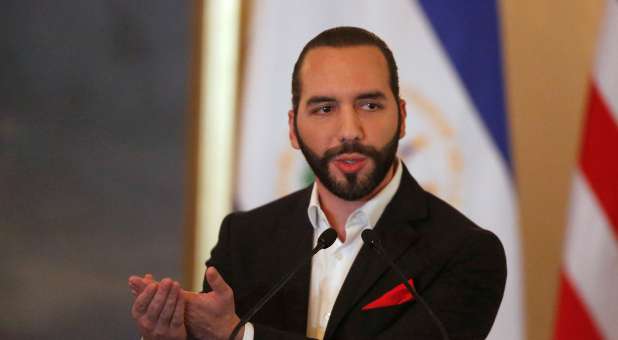 Yesterday in El Salvador, President Bukele  addressed a conference of pastors, businessmen and businesswomen, and local leaders. Bukele delivered a personal testimony. He told the story about being of Palestinian heritage and finding purpose in Christianity. He was a successful businessman by the age of 29, making more money than he ever dreamed. He had no desire to be a politician. He served as mayor to give back to his community as many self-sacrificing people do.

Last year, Bukele was approached by a group of pastors who told him they had received a spiritual message that he should run for president. His response was as you might expect: “No way; you’ve got to be kidding.” Later, another group approached him with the same prophecy. He thought it odd, but this time took note. As the deadline for making a decision about running for president neared, he was approached a third time. These pastors were certain they were correct in their message to him. They asked him to prayerfully consider a run. When they pressed him for an answer, they told him they would respectfully accept his decision. He again told them no.

Bukele struggled with his final decision. Soon thereafter, another pastor whom he did not know advised him not to “fall into the fourth place.” When asked to expand on what he meant, the pastor said it was missing God’s call on your life. Bukele then decided to reconsider and filed for the office of presidency.

In the opening days of the campaign, Bukele fell into disagreement with his political party. They threatened to kick him out of the party, which would eliminate his position on the ballot. He stood his ground, and the party expelled him. In his testimony to the audience, he said he asked God: “Why would You lead me to this point if You wanted me to run? Why did You allow this to happen?” He paused and then referenced the fact that God did not answer him.

However, a stranger turned up at the campaign headquarters and explained that Bukele could still get on the ballot with 50,000 citizens’ signatures on a petition. He had no idea how to obtain them. The stranger said, “We’ll take care of it.” Forty-eight hours later, 200,000 people had signed a petition for his candidacy. When advised of this, the campaign manager thought they had said 20,000 because even that seemed like an unrealistic number.

Bukele won the general election with 53% of the vote, trouncing all party candidates at one time. No individual had won the presidency in that country since 1972 without a major party endorsement. On the night of the election, he was still surprised at the results. In discussions with his spiritual leaders, he was asked, what makes you think God needs a political party?

Since his election, Bukele has instituted more reforms than all presidents of the previous 49 years combined. For instance, he swept all prisons of cell phones so inmates could not direct illegal activity outside of the prison walls. Funny, no one ever thought of that before!

What an amazing God story. Only God could have orchestrated Bukele’s election as President. The events described above defy any other explanation.

This article was extracted from a report by Marc Nuttle is Charisma News 24/07/2019.