The biggest crisis facing the evangelical, global church today is the growing lack of biblical literacy worldwide, according to Thomas Schirrmacher, the newly elected secretary-general of the World Evangelical Alliance. I agree with him.

“Our biggest problem is that Bible knowledge is fading away,” Schirrmacher told The Christian Post. “This is the utmost problem we have beyond all theological differences, financial problems, and political questions.”

According to the State of the Bible 2020 report released by the Barna Group and the American Bible Society, U.S. adults who say they read the Bible daily dropped from 14% to 9% between early 2019 and 2020.

The study found that the proportion of Americans who read the Bible daily also fell to fewer than one in 10 (9%), the lowest number on record during the 10 years of the State of the Bible research study.

We are talking about God’s Word, our Creator’s Word, that He wants to convey to His creation. To those, He made in His image. What could be more important? It contains the message of who we are, why we are separated from our Creator, why the world is like it is, and more importantly what God has done and is doing to put it right. The Bible gives us an accurate history of this world so different from the godless evolutionary view inspired by the god of this world, Satan.

Schirrmacher, who studied theology in Switzerland and the United States, and serves as the WEA’s Associate Secretary General for Theological Concerns, said that in the Western world “more and more kids that come from evangelical families are not really rooted in the Bible,” and many of them leave the faith.

In an increasingly polarized society, Schirrmacher also emphasized the importance of unity, stressing that the “biggest obstacle” to the spread of the Gospel are divisions within Christianity.

“We need to discuss much more and long for what is the DNA, I would say not only of evangelicalism but of Christianity,” he said. “What we have together is the Bible, Jesus, and the Gospel.” We cannot allow these central teachings of Christianity to fade away together with minor topics. Then, there will be nothing left.”

Fortunately, the good news is, God is active in His world. He will accomplish His purposes and it will unfold exactly as He tells us in His Word. As I have mentioned countless times before on this website, there are more prophecies about Jesus soon coming return then there were about His first coming to earth and there were more than 300 of those. It should be reason enough for everybody on this planet to want to spend time in His Word and for those who know Him to want to share the good news with others.

More from Dr Travis Freeman. He serves as Professor of Old Testament at the Baptist College of Florida in Graceville. He is a graduate of Ouachita Baptist University (B.A.) and Southwestern Baptist Theological Seminary (M.Div., Ph.D.). He has been a young-earth creationist for over twenty years and is a member of the Evangelical Theological Society Creation Fellowship. He chats with Dr Jonathan Sarfati of Creation Ministries. Go to http://www.creation.com for more from Jonathan.

Sadly, many Christian colleges teach that there are gaps in the genealogies of Genesis 5 and 11. Dr Freeman points out that there can be no time gaps, because: The biblical text gives the number of years between the births of the descendants of Adam in the line leading to Noah. By adding these numbers together, we can calculate the number of years from Adam to Noah. These numbers would be superfluous, even misleading, if generations are missing between fathers and sons. In fact, one strains without success to even imagine why the author of Genesis would include these numbers unless he meant to tie the generations together in a continuous sequence without chronological gaps.

“This type of genealogy seems to be designed for chronological purposes and never contains gaps, at least none that anyone has ever demonstrated. In fact, every biblical genealogy of this sort has been shown to be without gaps.Thus we can calculate that Genesis 5 and 11 record that about 2008 years passed between creation and Abraham’s birth around 1996 BC, thus rendering a creation date of about 4004 BC.”

Dr Freeman also pointed out that this understanding is hardly a novelty. Rather, “nearly all Bible scholars, Jewish and Christian, from the first century BC to about AD 1800 understood Genesis 5 and 11 as setting forth a no-gap chronology of ancient history. So, unless we are prepared to show how all of these scholars were wrong, we should reject the idea of gaps.”

Why was this clear understanding doubted from around AD 1800? Dr Freeman reminds us this is when old-earth ideas started to become popular in ‘science’, due to the Flood-rejecting uniformitarian dogma of Hutton and Lyell, explicitly designed to “free the science from Moses.” Long-age beliefs almost invariably come from such outside ideas being imposed upon the text, rather than anything in the text itself.

But don’t other genealogies, such as the Matthew 1 genealogy of Jesus, have gaps? Dr Freeman points out that this is a different genre, and a key difference is that “Matthew 1 does not record the number of years between generations. This type of genealogy often contains generational gaps, that is, some names are omitted for the sake of brevity or symmetry.”

The doctrine of creation

One of Dr Freeman’s most popular classes is his ‘The Doctrine of Creation’, which he summarises in three statements:

Since Dr Freeman teaches at a school that affirms the inerrancy and sufficiency of Scripture, I asked how all that is supported by the Bible. He pointed out that Genesis 1 declares that God created all things in six days. He explained that when modified by a number or by the phrase ‘evening and morning’, the Hebrew word for ‘day’ always means a solar day, not an indefinite period of time, in the Old Testament.

Also, the same chapter describes Adam, Eve, fruit trees, and other living things as mature at the time of their creation, and it says that they would reproduce after their kinds. That is, one created kind did not evolve into another, leading eventually to a group of human-like creatures.

Dr Freeman also stresses that Genesis 7 and 8 describe the Flood of Noah’s day as year-long, worldwide, earth-devastating, and deadly to all land vertebrates but those on the Ark. These things would be responsible for the formation of most of Earth’s sedimentary rock layers and fossils. Moreover, it is encouraging that more geologists now recognise that catastrophism provides a better explanation for the geomorphology we observe today than uniformitarianism.

Dr Travis Freeman serves as Professor of Old Testament at the Baptist College of Florida in Graceville. He is a graduate of Ouachita Baptist University (B.A.) and Southwestern Baptist Theological Seminary (M.Div., Ph.D.). He has been a young-earth creationist for over twenty years and is a member of the Evangelical Theological Society Creation Fellowship

Many people in the church think that it’s OK to believe in evolution over millions of years. Dr Freeman points out severe problems. One of the most important for Christians is surely that “Jesus contradicted evolution and millions of years when he said that God created Adam and Eve at the beginning of creation (Mark 10:5–9), not billions of years after a big bang.” 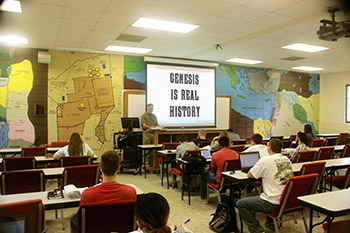 He further points out that a straightforward understanding of Genesis indicates that God created humans, animals, trees, and so on in mature form, and only a few thousand years ago.

Dr Freeman explains that real archaeology opposes long-age dogma, revealing no civilisations or historical documents older than a few thousand years. Geology also opposes this dogma, because creatures must have been buried quickly to form fossils, so the layers must have been deposited catastrophically. Also, there must be little time between the layers, because the contact lines are flat and largely erosion-free, and they have other features such as footprints that must have been preserved quickly.

How does creation matter to Christians?

Many in the church think of creation as a side issue. Naturally, Dr Freeman disagrees, and explains why it is actually foundational:

“God has placed in every person the desire to know the answer to some basic questions about life, such as who am I, where did I come from, why am I here, where am I going, and how should I then live? The biblical doctrine of creation answers those questions and thus helps us understand the need for obedience to our Creator, including belief in the Gospel. The doctrine of creation also helps us believe in the accuracy of the Bible, because we see that its opening chapters are compatible with history and science.”

Indeed, it was very important to Travis personally. First, as a young man, he was an agnostic: “I did not know the answer to those questions, especially, how I should live. I was confused about the meaning of life, or if there even was a meaning. The confusion showed in my behaviour.”

However, when he was 32, a pastor shared the Gospel with him. Like many people, Travis “objected that the Bible and its Gospel could not be true because we humans came into being through billions of years of blind evolutionary processes.” Many would-be evangelists would try to change the topic. Fortunately, not this pastor, who was well informed:

“In God’s providence, the pastor was also a biology teacher at a nearby university. He informed me that evolution was not even a good theory, and certainly had not been proven. His comments spurred me on a journey to find out the truth for myself. I soon came across several books, including The Genesis Flood by John Whitcomb and Henry Morris, which exposed the flaws in evolution and showed how the Bible and empirical science actually agree. Once I saw the accuracy of the Genesis account of creation, I knew instinctively that the rest of the Bible must be true. So, I repented of my sins and believed the Gospel of Jesus Christ. Now my life has meaning and direction—and may I add, great joy!”

We know of literally hundreds of people whose faith was ‘shipwrecked’ on the jagged reef of biblical compromise, but who, like Dr Freeman, were restored thanks to consistent biblical creation teaching. We trust that his encouraging testimony will help many more.