The sense of this verse spoken by Jesus in the Olivet Discourse is that the unrighteous will be taken by complete surprise at the coming of Jesus.

Jesus also gave us this reference to Noah’s flood as a picture of His wrath to come. Noah’s flood was the first occasion when God poured out His wrath upon a wicked and unrepentant world. Sadly, because of acceptance of evolution, the world does not believe Noah’s worldwide flood, and yet it is the only historical account that provides the best explanation for the geology and geomorphology that we see in the world today.

“Then the Lord saw that the wickedness of man was great in the earth, and that every intent of the thoughts of his heart was only evil continually. And the Lord was sorry that He had made man on the earth, and He was grieved in His heart. So the Lord said, ‘I will destroy man whom I have created from the face of the earth, both man and beast, creeping thing and birds of the air, for I am sorry that I have made them.’ But Noah found grace in the eyes of the Lord.” Genesis 6:5-8

The reason for His wrath being poured out in Noah’s day is that the hearts of the unrighteous conceived evil continually. Therefore, if Jesus words are to be believed, this will also be the state of the earth at His Second Coming.

The prophet Daniel also talks of the growth of evil in men’s hearts in the last days.

“And in the latter time of their kingdom, When the transgressors have reached their fullness (when their sin are coming to the full), A king (Antichrist) shall arise, Having fierce features, Who understands sinister schemes. His power shall be mighty, but not by his own power; He shall destroy fearfully, And shall prosper and thrive; He shall destroy the mighty, and also the holy people. “Through his cunning He shall cause deceit to prosper under his rule; And he shall exalt himself in his heart. He shall destroy many in their prosperity. He shall even rise against the Prince of princes; But he shall be broken without human means (on Jesus return with the Saints).” Daniel  8:23-25

Note the Antichrist arises when the sins of his followers “have reached their fullness”.

As some of my followers will have determined, I hold to a Prewrath Rapture position. It means that Christians will go through the tribulation period outlined by Daniel and John in Revelation, but not be subjected to the wrath of God that is poured out during the trumpet and bowl judgements.

For those of you who would like to explore this position further, I can recommend the resources produced by Alan Kurschner – Antichrist: Before the Day of the Lord and Nelson Walters – Rapture Case Closed? both who hold to the Prewrath Rapture position.

Don’t forget you can find sermons and videos relevant for these “last days” available for download on my other website http://www.powerpointsermons.net

I found the following fifteen tenets of the Prewrath position as outlined on Alan Kurschner’s website a great help and I hope you do too.

Another great teaching from Nelson Walters on the timing of the Rapture. Not date setting, but examining all the Scriptures  particularly Daniel with regard to understanding the 70th week. Search the Scriptures and the Holy Spirit will reveal more of His truth to you.

Jesus said, at His second coming, and before the wrath of God is poured out on the world, it will be as in the days of Noah before the flood came. People would not believe Noah until it will be too late. God’s wrath was poured out “against all ungodliness and unrighteousness of men”.

“Knowing this first; that scoffers will come in the last days, walking according to their own lusts, and saying, ‘Where is the promise of His coming? For since the fathers fell asleep all things continue as they were from the beginning of creation.” What is God speaking to you to do in these last days? How many in your family and how many of your friends are facing an eternity in Hell? Are you pleading with God to use you, to do what ever is necessary to get them into the Kingdom of God?

If you are interested in a Bible based synopsis of End Times signs, this is a must listen. You will need one and a half hours, but it is well worth the time. The content is comprehensive, make a note of all the Bible verses for your own study.

Scientists have long been able to make specific changes in the DNA code. Now, they’re taking the more radical step of starting over, and building redesigned life forms from scratch. Boeke, a researcher at New York University, directs an international team of 11 labs on four continents working to “rewrite” the yeast genome, following a detailed plan they published in March.

I wonder how God views man’s efforts to be the Creator. Is this another “end time” indicator? 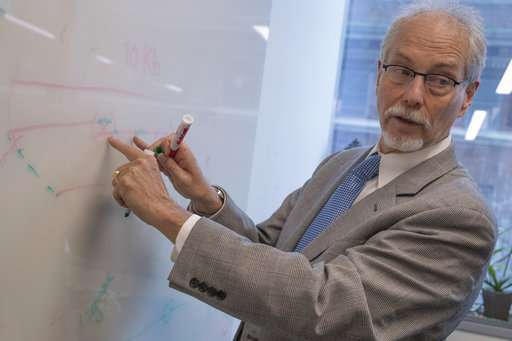 NYU School of Medicine Professor Department of Biochemistry and Molecular Pharmacology Jef D. Boeke speaks during an interview in his office at the Alexandria Centre for Life Sciences in New York.
Their work is part of a bold and controversial pursuit aimed at creating custom-made DNA codes to be inserted into living cells to change how they function, or even provide a treatment for diseases. It could also someday help give scientists the profound and unsettling ability to create entirely new organisms.

The genome is the entire genetic code of a living thing. Learning how to make one from scratch, Boeke said, means “you really can construct something that’s completely new.”

The research may reveal basic, hidden rules that govern the structure and functioning of genomes. But it also opens the door to life with new and useful characteristics, like microbes or mammal cells that are better than current ones at pumping out medications in pharmaceutical factories, or new vaccines. The right modifications might make yeast efficiently produce new biofuels, Boeke says.

Also on the horizon is redesigning human DNA. That’s not to make genetically altered people, scientists stress. Instead, the synthetic DNA would be put into cells, to make them better at pumping out pharmaceutical proteins, for example, or perhaps to engineer stem cells as a safer source of lab-grown tissue and organs for transplanting into patients.

Some have found the idea of remaking human DNA disconcerting, and scientists plan to get guidance from ethicists and the public before they try it.

Still, redesigning DNA is alarming to some. Laurie Zoloth of Northwestern University, a bioethicist who’s been following the effort, is concerned about making organisms with “properties we cannot fully know.” And the work would disturb people who believe creating life from scratch would give humans unwarranted power, she said.

“It is not only a science project,” Zoloth said in an email. “It is an ethical and moral and theological proposal of significant proportions.”

Rewritten DNA has already been put to work in viruses and bacteria. Australian scientists recently announced that they’d built the genome of the Zika virus in a lab, for example, to better understand it and get clues for new treatments.

At Harvard University, Jeffrey Way and Pamela Silver are working toward developing a harmless strain of salmonella to use as a vaccine against food poisoning from salmonella and E. coli, as well as the diarrhea-causing disease called shigella.

A key goal is to prevent the strain from turning harmful as a result of picking up DNA from other bacteria. That requires changing its genome in 30,000 places.

“The only practical way to do that,” Way says, “is to synthesize it from scratch.”

The cutting edge for redesigning a genome, though, is yeast. Its genome is bigger and more complex than the viral and bacterial codes altered so far. But it’s well-understood and yeast will readily swap man-made DNA for its own.

Last year, Boeke and others announced a separate effort, what is now called Genome Project-write or GP-write . It is chiefly focused on cutting the cost of building and testing large genomes, including human ones, by more than 1,000-fold within 10 years. The project is still seeking funding.

In the meantime, leaders of GP-write have started discussions of ethical, legal and social issues. And they realize the idea of making a human genome is a sensitive one.

“The notion that we could actually write a human genome is simultaneously thrilling to some and not so thrilling to others,” Boeke said. “So we recognize this is going to take a lot of discussion.”