Great Easter message. Pass it on

I’m sure it’s the little boy still hiding in my 57-year-old paralyzed body, but I enjoy trying to pull off a good April Fools Day joke on Mary. In our thirty-two years of marriage, I probably have a 75% success rate.

It can be a real challenge to carry out a successful April fools joke with ALS because I can’t speak so I have to attempt to fool her via email or using my computer’s (no inflection) robot voice (the only “voice” I’ve had for the last twenty years).

As I’m sure you know, April Fools Day and Easter (the day we celebrate Christ’s resurrection from the dead) fall on the same day this year. The two have not fallen on the same day since 1956.

Are Christians foolsfor believing that Christ was literally raised from the dead?

Atheists, agnostics and those of other faiths, believe it…

For the first time since ISIS drove all the Christians from Iraq’s Nineveh Plain in 2014, the Christian town of Qaraqosh celebrates Palm Sunday after many of its families have returned. During this week leading up to Easter, Open Doors team on the ground visits Qaraqosh to meet with Christians there.

Today, the world can see and hear the powerful truth—Christians have returned to the Nineveh Plain. Thousands of Iraqi Christians walked through the streets of the ancient town, waving palm and olive branches; praying, singing and remembering the triumphant entry of Jesus Christ. Their chorus: “King of kings and Lord of Lords. Glory! Hallelujah!”

We spoke with a 25-year-old teacher named Andraws. His message to Christians around the world was clear: “Please do not lose hope. Two and a half years we were displaced and we almost lost hope to ever return here. But today, we are here again, because of Jesus; because we had hope in Him,” he said.

Standing amidst the thousands of Christians, Andraws adds: “As you can see: the Christians have returned to Qaraqosh!”

Andraws and his family joined the march that ended with an open air service on the square of Qaraqosh’ St. John’s Church. The roof of the church served as a pulpit for the Church leaders, proclaiming the gospel, reading the Bible and leading the crowd gathered in the square into worship and singing Hosanna.

Andraws, an English teacher in Qaraqosh’s recently reopened school, says: “Today is the start of the week of Easter. And we are very excited about it. I’m glad that we can celebrate Palm Sunday again in our city. Thank God for that. Because three years ago, something like that would never happened, when we were displaced.”

Faith strengthened because of ISIS

The young teacher tells us how his faith changed after ISIS forced him and his family out of their town, leaving almost everything they owned behind because they refused to renounce their faith in Christ. “During the first days we were displaced, I felt like there was no God or Jesus; because of the things that happened to us. But after that, I realised that Jesus does exist and we have to believe in Him.” “And because of Him, we are here today.”

Do Christians in your city celebrate Palm Sunday like these Iraqi Christians?

According to the annual pattern that God gave Israel, the day we call ‘Palm Sunday’ was Lamb Selection Day! They were to choose an unblemished male lamb and keep it until the fourteenth day of the month when it would be killed at twilight for Passover. Exodus 12:2-6 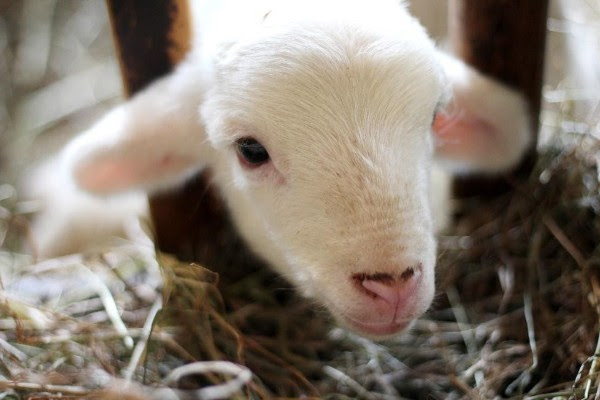 Pause to revere Jesus: “…you were…redeemed with precious blood, as of a lamb unblemished and spotless, the blood of Christ.” 1 Peter 1:18-19

“God commanded the priests of Israel to sacrifice two offerings daily, one in the morning, at the 3rd hour which was 9:00 am and one at the ninth hour of the day which was 3:00 pm. Jesus was hung on the cross at the exact time the priests were sacrificing the morning burnt offering. At 3:00 pm the Passover Lamb, the Lord Jesus was slain, as Jesus breathed his last! On Day of Atonement, the high priest would declare after the evening sacrifice, “It is finished!” Jesus our High Priest, cried out with every ounce left in his physical being, “It is finished!” This statement literally meant, “Paid in full!” Jesus purchased us and brought us into his glorious inheritance!” (Dr Jason Hubbard, Lamb’s Reformation, 2017, p.43)

Jesus’ exemplified a ‘heart of humility’, the sweet and lowly gentleness recognised as the mark of the Lamb of God.”  Jesus, the Lord of all, became the servant of all.

As we approach the end of the age, we must see and encounter the face of Jesus as the Lamb! Twenty-eight times in the book of revelation, Jesus is revealed as the Worthy Lamb! Do we really comprehend what Jesus did for us when He became a man on His earth? The extent of His love for us. How do we respond to such love?

“God the Father took His eternal wrath, condensed it, and emptied it into His cup. He distilled eternal judgement, the very lake of fire, hell’s blazing fury and then asked His Son to drink the cup of wrath on our behalf.” Dr Jason Hubbard, Lamb’s Reformation, 2017, pp. 29

“My soul is deeply grieved and overwhelmed with sorrow, to the point of death; remain here and keep watch.” After going a little farther, He fell to the ground [distressed by the weight of His spiritual burden] and began to pray that if it were possible [in the Father’s will], the hour [of suffering and death for the sins of mankind] might pass from Him. He was saying, ‘Abba, Father! All things are possible for You; take this cup [of judgement] away from Me; but not what I will, but what You will.” Mark 14:33-36 AMP

God does use the most unlikely people to bring His truths to the world. Just as he used Mel Gibson to produce and distribute The Passion of Christ. In this case it is Affirm Films, a division of Sony Pictures Worldwide Acquisitions.

AFFIRM Films brings to vivid life on screen the epic story of Paul, the man who went from persecutor of the church to its most powerful and important proponent. Paul suffers alone in a Roman prison, awaiting his execution under Emperor Nero. Mauritius, the ambitious prison prefect, can hardly see what threat this broken man poses. Once he was Saul of Tarsus, the high-ranking and brutal killer of Christians. Now his faith rattles Rome. At great risk, Luke the Physician visits the aged Paul to comfort and tend to him—and to question, to transcribe and to smuggle out Paul’s letters to the growing community of believers. Amid Nero’s inhuman persecution, these men and women will spread the Gospel of Jesus Christ and change the world. Starring Jim Caviezel (“Passion of the Christ”), James Faulkner (“Game of Thrones”), Olivier Martinez (“SWAT”), Joanne Whalley (“A.D. The Bible Continues”) and John Lynch (“The Secret Garden”).

It is be released in the USA in time for Easter 2018. Watch out for it.

Up front, in the book of Romans, Paul brings to us important truths for these “last days” “For the wrath of God is revealed from heaven against all ungodliness and unrighteousness, because what may be known of God is manifest in them, for God has shown it to them. For since the creation of the world His invisible attributes are clearly seen, being understood by the things that are made, even His eternal power and Godhead, so that they are without excuse, because although they knew God, they did not glorify Him as God, nor were they thankful, but became futile in their thoughts, and their foolish hearts were darkened. Professing to be wise, they became fools, and changed the glory of the incorruptible God into an image made like corruptible man… Therefore God also gave them up to uncleanness, in the lusts of their hearts, to dishonour their bodies among themselves, who exchanged the truth of God for the lie, and worshipped and served the creature rather than the creator… For this reason God gave them up to their vile passions. For even their women exchanged the natural use for what is against nature. Likewise also the men…” Romans 1: 10-27