This and the previous post promote two books which need to be promoted widely. ZOMBIE SCIENCE in particular reveals how devastating this theory has been to the authority of God’s Word. It actively promotes a materialistic philosophy. Here is what Jonathan Wells thinks of clergymen who claim that evolution and God are “bosom buddies”. Get real! 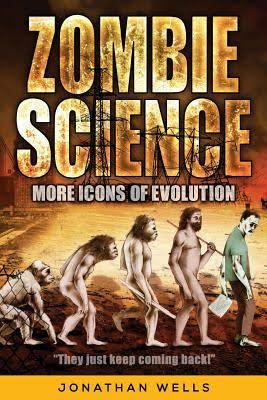 Jonathan Wells wrote Icons of Evolution, back in 2002 in which he identified common themes in college textbooks that are used to illustrate evolution, even though they are dubious and even discredited. In this forceful sequel Jonathan refutes criticisms of his original work, and shows that, far from being corrected, these icons not only persist, but have been joined by new icons. That is why we are dealing with zombie science. Wells clearly shows that evolution, as currently taught, has a stifling effect not only on religion, especially Christianity, but also on science itself. Evolutionist ideology – not innocent mistakes. They are intentional – done to promote evolutionism and its materialism at all costs.

According to the establishment science is supposed to deal with factual matters, while religion is relegated to subjective feelings and imagination. This right then and there is prejudicial to religion. Wells quips:

“In effect, this is just a restatement of materialistic philosophy. It’s a bully tactic to convince religious believers that they are not entitled to say anything about objective reality” (p.172). No kidding!