This article by David Leyonhjelm, Contributor, The Daily Reckoning makes a worthwhile contribution to the problem. I am sure you won’t agree with all of his suggestions but it will challenge most of us.

“Calls to solve the Middle East refugee crisis have been loud but vague; so here’s my guide to dealing with the situation compassionately and effectively. 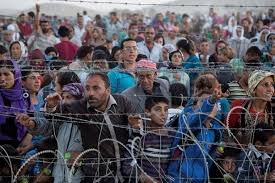 Invite a refugee family to stay at your place: Contact the Refugee Council, Uniting Church or Red Cross to offer your spare room to someone in need. After all, just going to a rally or signing a petition is a bit vacuous. When you said, ‘welcome more refugees’, didn’t that mean you would welcome them? Or did you think that someone else would do it?

Employ a refugee, or let someone else do so: Most refugees want to work. If you’re not in a position to offer a job, don’t prevent others from doing so. Many lack the language or skills to jump straight into a $17.29 an hour gig, yet would gladly take a job that pays more than welfare. Exempt refugees from the minimum wage. Many Australians who dislike welfare-dependent refugees would be more welcoming if they paid their way via employment.

Cut foreign aid: Doubling our refugee intake would cost a billion dollars, but if we cut foreign aid by the same amount, taxpayers who worry about the cost of helping foreigners would have nothing to complain about. We’d still fund short-term humanitarian assistance, because cutting a billion dollars from foreign aid still leaves billions more. And we’d do more good for foreigners by bringing them here than channelling cash to corrupt local elites.

Think global, act local: While there are millions fleeing the Middle East, there are also millions fleeing trouble spots closer to home — Burma, Sri Lanka and Vietnam. Taking refugees from our region would do as much good as from Syria (although persecuted Christians from Syria should be fast tracked*). And realistically, we have more capacity to assimilate Buddhists, Hindus and Christians to our way of life and liberal democracy than we do Muslims.

Let people in as interim second-class residents: Australians would accept a much higher intake, if migrants did not immediately have access to taxpayer‑funded welfare, healthcare, housing and education as citizens. They would also accept a much higher intake if the hurdle to obtain citizenship were higher. Some will argue that they don’t want a two-tiered system in Australia, but if we ask potential migrants if they want to come even without access to our social welfare system, I’m pretty sure what most would say.

Be the best we can be: Economic development and growth isn’t just in our own interest. It means we can afford to be the most altruistic country on the planet. So listen to those who want to approve developments, cut red tape, remove industry protectionism, and get resources out of the public sector into the private sector: they’re the most compassionate Aussies around.”

Baltimore’s State’s Attorney Marilyn Mosby on Freddie Gray Case: God ‘Put Me in This Position for a Reason’

Marilyn Mosby prays with church leaders, including Bishop Angel Nunez, during a prayer breakfast in Baltimore, Maryland, on April 28, 2014

Baltimore’s State’s Attorney Marilyn J. Mosby, the woman who criminally charged six police officers in the death of Freddie Gray on Friday, is a practicing Christian who declared at a recent prayer breakfast that God “put me in this position for a reason.”

“Mosby is a Christian, she loves the Lord. She’s part of our Multicultural Prayer Movement. I was in her office last week. I took her hands and we prayed together, and we wept and I prayed over her and I said: ‘God has raised you a woman of God for such a time as this. This is why God put you here and we stand with you.’ The woman depends on the Lord. This is a 35-year-old woman, an Esther in this hour,” said Bishop Angel Nunez, who leads Baltimore’s Multicultural Prayer Movement, in an interview with The Christian Post on Friday.

On Tuesday at the Bilingual Christian Church, Mosby spoke with members of the Multicultural Prayer Movement group, of which she is also a member. At one point church leaders, including Nunez who has been her friend for five years, gathered around her and prayed.

“I was reminded of Isaiah 41 verse 10,” Mosby, who recalled once having self-doubt while seeking election as Baltimore’s state’s attorney, told the congregants.

“Fear not for I am with you, be not dismayed for I am your God. I will strengthen you, I will help you, I will uphold you with my righteous right hand.”

And that is what kept me grounded whenever I had that self-doubt, whenever I said this is too much for me to handle as a wife, as a mother, as an attorney. I’ve got to tell you that God got me through and I have to believe that He put me here for a reason,” she said.

“So we will pursue justice by any and all means necessary. I appreciate your support Bishop [Nunez], you’ve been there for me from the very beginning,” Mosby added, before alluding to the riots which appeared to come to a halt after charges in Gray’s death were announced.

“Nothing transcends the power of prayer and let me tell you, our young people, I know that they’re called ‘thugs.’ Those are young people crying out; there’s a sense of hopelessness in this city and there’s nobody that can touch them the way that you all can, the way that we can …”

In the USA the powerful global Humanist activist network has successfully used leftist-liberal “judicial activism” to impose atheistic secularism under the deception, secularism is religiously neutral. In fact secularism is in reality the imposition of the atheist world view.

Humanists are not only intent on eradicating theism and all things Christian from all State and public institutions, but from the public domain, to the point where wearing crosses in the workplace and street preaching is now under attack in the UK.

The most extreme form of atheism is being imposed on both public and private school science classes in the guise of philosophical naturalism and scientism – NOT science.

There are few dissenting voices left but one of the few conservative Supreme High Court justices is Antonin Scalia. He has openly expressed concern at the “judicial activism” being engaged in by unelected leftist liberal USA Supreme Court justices to overturn acts of elected branches of government and the long standing Judeo-Christian history and heritage of the nation.

Here in Australia recently retired High Court judge John Dyson Heydon AC, in the recent High Court school Chaplains, Williams vs The Commonwealth decision has openly expressed concern about the High Court “judicial activism”. He has spoken out against judges who “assume a law making role” and how ‘judicial activism’ results in the death of the rule of law in Australia.

Thus it is ATHEISM that is being imposed on Nations by leftist-liberal majority Supreme and High Court justices. The Bible calls these people fools as they suppress the truth in unrighteousness. Sadly they influence millions consigning them to God’s white throne judgment and an eternity in Hell.

In February 2013, I gave a speech at the National Prayer Breakfast. Standing a few feet from President Obama, I warned my fellow citizens of the dangers facing our country and called for a return to the principles that made America great.

Many Americans heard and responded, but our nation’s decline has continued. Today the danger is greater than ever before, and I have never shared a more urgent message than I do now. Our growing debt and deteriorating morals have driven us far from the founders’ intent. We’ve made very little progress in basic education. Obamacare threatens our health, liberty, and financial future. Media elitism and political correctness are out of control. Worst of all, we seem to have lost our ability to discuss important issues calmly and respectfully regardless of party affiliation or other differences. As a doctor rather than a politician, I care about what works, not whether someone has an (R) or a (D) after his or her name. We have to come together to solve our problems. Knowing that the future of my grandchildren is in jeopardy because of reckless spending, godless government, and mean-spirited attempts to silence critics left me no choice but to write this book. I have endeavored to propose a road out of our decline, appealing to every American’s decency and common sense. If each of us sits back and expects someone else to take action, it will soon be too late. But with your help, I firmly believe that America may once again be “one nation under God, indivisible, with liberty and justice for all. Sincerely, Ben Carson