“I pray to get to know the will of God, because then the prayers have more chance of coming true — I mean, that’s the thing about prayer,” Bono told interviewer Gay Byrne, RTE ONE Television. “We don’t do it in a very lofty way in our family. It’s just a bunch of us on the bed, usually, we’ve a very big bed in our house. We pray with all our kids, we read the Scriptures, we pray.”

Byrne presses Bono on his perception of Jesus — Was he divine? Did he truly rise from the dead? Bono answers in the affirmative.

“[Jesus] went around saying he was the Messiah. That’s why he was crucified. He was crucified because he said he was the Son of God. So, he either, in my view, was the Son of God or he was nuts. Forget rock-and-roll messianic complexes, I mean Charlie Manson-type delirium. And I find it hard to accept that whole millions and millions of lives, half the Earth, for 2,000 years have been touched, have felt their lives touched and inspired by some nutter. I just, I don’t believe it.”

When asked if he believed Jesus made promises that would come true, Bono replied, “Yes, I do.” 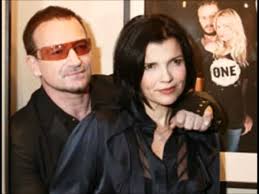 Married to Ali for thirty two years. They have four children with whom they share their strong faith in Jesus. A family that prays together stays together.

How could you believe that this universe made itself when you listen to “You Raised Me Up” and view these beautiful images of God’s creation. The notion that these voices and these lyrics are a product of chance; how absurd, how ridiculous. God made this universe and He made us in His image with the ability to create sounds and images which stir our emotions. ENJOY.