Eberlin’s book demonstrates that the currently available scientific knowledge increasingly points to the existence of a supreme being who carefully planned the universe and life. This breakthrough will revolutionize science in the years to come.

Two Nobel prize winners are happy to recommend Eberlin’s book to those interested in the chemistry of life. They state the author is well established in the field of chemistry and presents the current interest in biology in the context of chemistry. An interesting study of the part played by foresight in biology.
1. Sir John B. Gurdon, PhD, Nobel Prize in Physiology or Medicine (2012), Co-Founder of The Gurdon Institute, University of Cambridge.
2. Brian David Josephson, PhD, Nobel Prize in Physics (1973),
Professor Emeritus of Physics, University of Cambridge

This book provides masterful information about teleology, an exciting and prominent scientific field that provides irrefutable evidence of foresight in nature. The arguments raised in the book are convincingly supported by incontestable and previously published experimental data, much of it gathered from prestigious scientific journals. Dr. Marcos Eberlin brilliantly makes use of his expertise, achieved in more than twenty five years applying mass spectrometry in assorted areas such as biochemistry, biology, and fundamental chemistry to outline a convincing case that will captivate even the more skeptical readers.

Dr Deweese says, the divide in science between creation and evolution is over the interpretation of the same data. However, for Joe it is all about the fact, we can see God’s design and power evident in what He has made. “For since the creation of the world His invisible attributes are clearly seen, being understood by the things that are made, even His eternal power and Godhead, so that they are without excuse.” Romans 1:20. This Scripture is what impacted Dr Joe Deweese the most. Listen to his short testimony. You can go to genesisishistory.com for many more testimonies from PhD scientists.

Despite the overwhelming evidence for design in the universe, Intelligent Design’ (ID) is virtually outlawed in academia. They recognise that it must mean that there is an intelligence behind the design, an intelligence outside and above the design itself; and in the context, the design of living things. The term ID is mocked at school (pupils who espouse it have been humiliated by teachers) and universities and it is dismissed in the media. 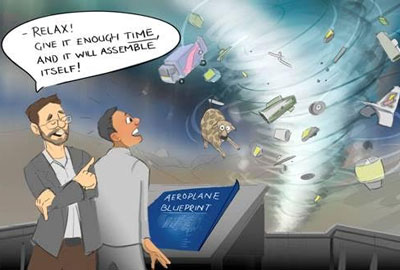 INTELLIGENT DESIGN is not really a very intelligent term, because it is tautologous: design must by its very nature be intelligent. Perhaps this can be best explained by looking at the other side of the coin. Could there be such a thing as ‘Unintelligent Design’?

It is incongruous that popular TV presenters of the “natural” world  such as David Attenborough, continually make references to ‘design’. Many features are referred to as ‘a wonderful design’, or it is said that they are ‘designed to’ accomplish some specific end, such as keeping warm, attracting a mate, enabling flight, or whatever. And yet, David Attenborough is utterly opposed to any idea of an outside intelligence.

If ID is not an acceptable concept, but the fact of design is acknowledged, then the only alternative is ‘Unintelligent Design’. Now this does not mean ‘bad’ design (good design and rubbish design both qualify as design), but the absence of any intelligence behind the design.1 Let us give a little thought to what this means. Design’ carries with it the idea of purpose—indeed it is essential to the very concept of design, which must be a teleological act. If it isn’t purposeful, it is no longer design, but merely accident. If something is designed it must be the product of intelligence, whether low or high-level intelligence.

The only alternative to design by an intelligent agent is design by evolution—which, one assumes, must be ‘Unintelligent Design’. But we have already determined that design is not logically possible without intelligence, at some level. How are we to resolve the paradox? According to most dictionary definitions, evolution is a blind stochastic process, simply a description of what allegedly happened in the past without any intelligent input. A process cannot design anything, thus evolution cannot design! But perhaps evolution is more than a process? Although a non-material entity, maybe it has mysterious powers to direct and select. If so, the same powers that theists ascribe to a Creator God are simply being ascribed to evolution. This rather gives the game away.        For its proponents, belief in evolution is a faith, a creed, just as surely as any other faith. We might even say that evolution has become ‘god’ as far as its adherents are concerned, able to do anything ascribed to it. The question needs to be asked. How come evolution is being taught as fact in our schools and universities?

In conclusion, if we refuse to accept the concept of Intelligent Design in the natural world, we have to conclude that our existence is merely the result of countless random events and is utterly meaningless. The presenters of popular science programmes need to take note: nothing is designed to work, and the fact that it does is just an accumulation of billions of accidents. There is one philosophical problem, however. We are creatures who design incessantly. Where did we get our concept of design if there was no such thing?

There are none so blind as those who will not see.