Let us look at the significance that the Bible puts on the seeming resurrection of the Antichrist from the dead. In the relatively short chapter of Revelation 13, it mentions the Antichrist’s fatal wound that was healed three times. The first instance is in verse 3: “And I saw one of his heads as it were wounded to death, and his deadly wound was healed: and all the world wondered after the beast. And they worshiped the dragon, which gave power unto the beast: and they worshiped the beast, saying, ‘Who is like unto the beast? Who is able to make war with him?’” – Revelation13:3-4

Here it seems to imply that the world’s worship of the beast is directly connected to his deadly wound being healed. It says that they “wondered after him saying “Who can make war with him?” This is the exact same word used in our current verse: “wondered.” It is also in the exact same context, i.e., wonder from the earth dwellers, associated with worship, and the antichrist’s apparent resurrection from the dead.

This is one of the first descriptions of the antichrist we are given in Revelation 13, right after the symbolic imagery of verses 1 and 2. This is the first thing that we are told about the beast – that he has a deadly wound that is healed. The Bible, as we will see, considers this event very important. By the second reference to this event in verse 12, the idea of a healed deadly wound has become a title or an identifying description of the beast. Here it distinguishes the first beast from the second by adding the clarification: “whose deadly wound was healed.”

“And he [false prophet] exerciseth all the power of the first beast [Antichrist] before him and causeth the earth and them which dwell therein to worship the first beast, whose deadly wound was healed.” – Revelation 13:12

And in the third reference in Rev: 13:14, we see that the healed deadly wound is used again as a title or distinguishing characteristic of the antichrist beast. Here it says:

Arthur Pink, an early English Bible scholar who wrote extensively on the Antichrist, agrees. He said the following: “A further reference to the resurrection of the Antichrist, his coming forth from the Bottomless Pit, is found in Rev. 17:8…. It is to be noted that the earth-dwellers wonder when they behold the Beast that was (alive), and is not (now alive), and yet is (raised again). The world will then be presented with the spectacle of a man raised from the dead.”

Is it any wonder then that the Bible says the world will follow after him even the False Prophet, leader of the world’s religions. Check out my last post – “Proposed visit to Iraq by Pope Francis”.

Plans were revealed for the construction of an interfaith complex that will house a church, synagogue, and mosque in the United Arab Emirates as part of an effort to promote religious harmony and bridge adherents of the three Abrahamic religions. The complex, known as the Abrahamic Family House, will be located on Saadiyat Island near Abu Dhabi.

The project is a result of Roman Catholic Pope Francis’ papal visit to Abu Dhabi in February when the pontiff and the Grand Imam of al-Azhar in Egypt signed a declaration establishing the interfaith Higher Committee of Human Fraternity.

Members of the committee

The Abrahamic Family House is the first formal initiative of the higher committee. Plans by British architect David Adjaye were unveiled during the Celebration of Human Fraternity at a New York City public library on Sept. 20. In a statement, Adjaye declared that the Abrahamic Family House will be “open to the world.” He expressed hope that it will serve as a space for people across society to “learn and engage in a mission of peaceful coexistence for generations to come.

Higher Committee member Rabbi M. Bruce Lustig of Washington Hebrew Congregation said in a statement that the new complex is an “important opportunity for all who believe in the power of faith and humanity.”

“It will help build bridges between religious leaders and communities as well as foster peace and harmony in an era that is too often defined by difference,” Lustig said. “I am honoured to be part of such an esteemed group working to champion love over hate, justice over injustice, and faith over fear.” 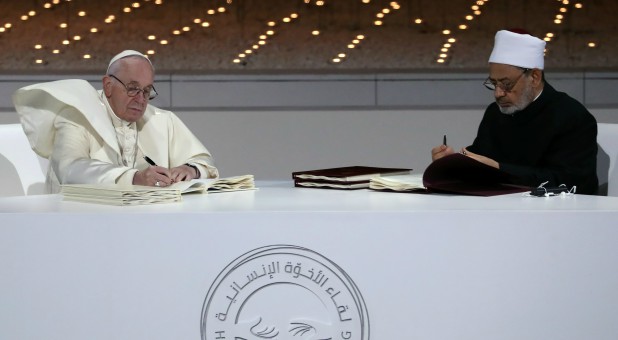 A new video has just been released in which Pope Francis very clearly expresses his belief that all of the major religions are different paths to the same God. He says that while people from various global faiths may be “seeking God or meeting God in different ways” that it is important to keep in mind that “we are all children of God”. This is the most recent example that shows that the Pope has completely abandoned any notion that a relationship with God is available only through Jesus Christ. In fact, he has warned that seeking a personal relationship with God is dangerous.

As he has done throughout his papacy, he continues to lay the groundwork for the coming one world religion, and yet hardly anyone seems upset by this.

The Pope’s first-ever video message on his monthly prayer intentions was released Tuesday, highlighting the importance of inter-religious dialogue and the beliefs different faith traditions hold in common, such as the figure of God and love. Pope Francis said in his message, released Jan. 6, the feast of the Epiphany:

“Many think differently, feel differently, seeking God or meeting God in different ways. In this crowd, in this range of religions, there is only one certainty that we have for all: we are all children of God,”