God’s Word clearly tells us to ‘pray about everything.’

“Rejoice always, pray without ceasing, give thanks in all circumstances; for this is the will of God in Christ Jesus for you. Do not quench the Spirit. Do not despise prophecies, but test everything; hold fast what is good.” 1 Thessalonians 5:16-21

What an important Scripture read it often and practice what it teaches and you will know the truth about God and His desire to be in a relationship with you.

Today, science is beginning to recognize the value and the power of prayer. Researchers investigating the role of faith in health are discovering evidence that’s hard to refute.

THE MIND HEALTH REPORT (Secrets to Unlocking Your Mind for Work, Love, and Life) produced by Newsmax: A 2014 study confirmed that people who engage in private prayer, intercessory prayer, and church activities are healthier and live longer.

FLORIDA STATE UNIVERSITY: Researchers found that praying for somebody increases your readiness to forgive them. When a group of men and women prayed for the well-being of a close friend every day for four weeks, they were more willing to forgive not only the friend but people in general. Forgiveness is associated with better overall health and satisfaction with life.

UNIVERSITY OF MIAMI: Their researchers discovered that prayer and religious practices improve your ability to pursue and achieve long-term goals. Prayer affects regions in your brain that improve self-control, and people who view their goals as sacred are more determined to attain them.

UNIVERSITY OF WISCONSIN-MADISON: A research study conducted by the University of Wisconsin-Madison concluded that victims of abusive relationships recovered a positive self-image and reduced their emotional pain when their lives included prayer.

“As for you, do not pray for this people, or lift up a cry or prayer for them, and do not intercede with me, for I will not hear you.” Isaiah 7:16

“But seek the welfare of the city where I have sent you into exile, and pray to the Lord on its behalf, for in its welfare you will find your welfare” Isaiah 29:7

Source: The Word for Today

Gone are the days when gun-shy theologians bowed to the god of science. Reliable scientists are now affirming how ingenious God is and how His principles hold up under the piercing light of scientific scrutiny.

Neuroscientist Andrew Newberg, MD, who studies the relationship between spiritual phenomena and the brain, has demonstrated that we were designed physically and mentally to interact with God through prayer and Scripture. It’s a known fact that there are centres in the human brain that respond positively to prayer, reading and meditating on God’s Word, group worship, hymn singing, and empathy for other people. And Dr Newberg believes that practising a personal religious faith is the most powerful way to maintain a healthy brain.

The brain’s frontal lobe is used in focusing attention, rational thinking, and decision-making. It responds to prayer and meditation by helping to reduce stress, strengthen our immune system, enhance memory, and increase our capacity for compassion. It helps us ward off age-related brain deterioration and live longer! Newberg’s research indicates that praying for at least twelve minutes a day slows age-related brain decline. Prayer and reading Scripture also deactivates areas in the brain associated with anger, guilt, anxiety, depression, fear, resentment, and pessimism. It seems that finally, twenty-first-century science has joined ancient Scripture in echoing what the psalmist said: “Thank You for making me so wonderfully complex! Your workmanship is marvellous.’”

“For you formed my inward parts; you knitted me together in my mother’s womb. I praise you, for I am fearfully and wonderfully made. Wonderful are your works; my soul knows it very well.” Psalms 139:13-14

Can you think of a better reason to ‘let the Word of Christ dwell in you richly’?

“And be thankful. Let the word of Christ dwell in you richly, teaching and admonishing one another in all wisdom, singing psalms and hymns and spiritual songs, with thankfulness in your hearts to God.” Colossians 3:16

Your worldview affects how you will deal with this virus. Dr Shiva a PhD biologist is recognised in the medical world as an expert on the immune system. He understands the amazing ability of the immune system to deal with viruses such as the corona virus so he gives us a very different view of how this virus should be handled by governments. Realising only compromised immune systems will result in this virus causing disease should determine how governments legislate this pandemic. Dr Shiva says, the real issue is our immune health and this is what needs to be addressed. A nutritional approach makes good sense. Listen to what he suggests for each group that are compromised and susceptible to the virus. For most of us that are in good health, he suggests a “shield approach” with – 5,000 to 10,000 units of Vitamin D and A, make sure our iodine levels are good and then get back to work.

His explanation of how the establishment is using these circumstances to undermine and remove any anti establishment power blocks that have been elected to power by the people such as Trump is instructive.

You need to listen to this video, it will give Saints, who understand that ultimately God is in control, a fresh understanding on what is happening in the world in relation to the Biblical prophecy of a future one world government.

No doubt, you have heard, as I have, messages from prominent preachers promising you health, wealth and happiness through coming to Jesus. There are verses in the 66 books of the Bible that support this premise but there is plenty of evidence in the scriptures and lives of Christians including the Apostles, that present a very different view.

“They were stoned, they were sawn into two, they were killed with the sword…..destitute, afflicted, mistreated” Hebrews 11:37

There is happiness that comes from the abundant life God promises to the believer (John 10:10). Moreover the Gospel has transformed societies and even nations with amazing benefits. Peace and joy does come from the indwelling Holy Spirit that assures us our sins are forgiven, FOREVER and as our relationship  with God deepens our lives are transformed into the likeness of Jesus.

In a real sense, the benefits are a side effect of the Gospel. They are an adjunct to the main game, which is all about God and the eternal relationship He desires with us.

We trust God and His Word and look forward to the promised New Heaven and New Earth. In the meantime we get on with accomplishing His plan and purpose for our lives. 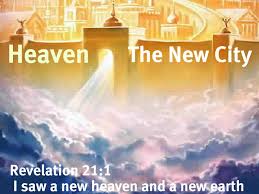