I am sure Ron Cantor is correct in his latest book that in the “end times” the church will operate in the gifts of the Holy Spirit much as they did in the early church as described in the Book of Acts.

Because of reports like those in my recent post, Church in the Last Days – Iran’s Fast Growing Church posted October 26th, 2019, we are already seeing a great outpouring of the Holy Spirit promised by Jesus in the last days before His return.

Even in the midst of great darkness and tribulation this revival will overshadow the book of Acts. It has started in many places like China, Africa, Middle East , even India. While we are waiting for a move of God in many parts of the world, a great outpouring is already taking place in these countries where they are already experiencing intense persecution.

Sadly, Scripture tells us that in the last days we will also see a great falling away from the faith. In the west, we are already seeing entire church denominations compromising with the world, accepting gay marriage and homosexual pastors/leaders. In a recent post, I reported on Pope Francis declaring that Christians are not to try and convert Muslims or people of other faiths as “we are all children of the same God”.

Pope Francis and Sheik Ahmad el-Tayeb, grand imam of al-Azhar, a leading authority for many Sunni Muslims signed a document on “human fraternity” and improving Christian-Muslim relations in February, 2019. The document insists on the basic human right to freedom of religion, appealing to both Christians and Muslims not only to tolerate the religious faith of the other, but to recognise the other’s faith as something “willed by God in his wisdom.”

This Pope is consigning millions to the Lake of Fire. There is NO way back into a right relationship with God other than by repentance, acknowledging the sacrifice Jesus made for us on the Cross and accepting His Lordship over us and all creation.

A few years ago, Pastor Shane Idleman prayed, “Lord, bring revival to the churches.” Read the response God gave him.

“I was not ready for the response that followed. I felt impressed with these words: “You don’t want revival—it will ruin your schedule, your dignity, your image and your reputation as a person who is ‘well balanced.’ Men will weep throughout the congregation. Women will wail because of the travail of their own souls. Young adults will cry like children at the magnitude of their sin. With the strength of My presence, the worship team will cease playing. Time will seem to stand still. You won’t be able to preach because of the emotions flooding your own soul. You’ll struggle to find words but only find tears. Even the most dignified and reserved among you will be broken and humbled as little children. The proud and self-righteous will not be able to stand in My presence. The doubter and unbeliever will either run for fear or fall on their knees and worship Me—there can be no middle ground. The church will never be the same again.”

Pastors, do you truly want revival?

What about Christian leadership? Is it ready for revival?

Shane Idleman was recently asked for his take on the controversy surrounding Francis Chan speaking at what some call “questionable events.” He took time to pray while driving three hours to one of these events to meet Chan and hear him speak. Once again read the outcome. 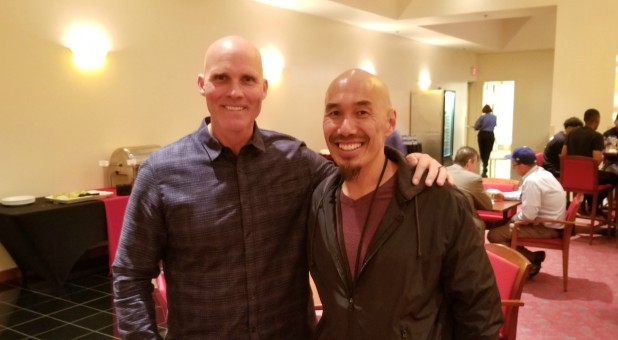 “When I met Chan backstage, I found him to be very humble and eager to listen as we talked about these issues. True to form, he also delivered a powerful message on repentance. Isn’t that our goal as preachers? The event moved me deeply during worship, and I had the opportunity to meet some of the other speakers such as Corey Russell and Derek Carr. Their passion for the lost and their heart for “genuine” revival was evident, as thousands came forward to recommit and renew their relationship with the Lord.

The irony is that when I try to tell it like it is, heresy hunters are not open, humble or teachable. The old adage “Don’t confuse me with the facts” comes to mind.

Why are emotional worship nights of prayer, and pressing into God, viewed as fanatical when these things are actually biblical? Why do I never see the heresy hunters at all-night worship services or broken by the Lord at the altar? This question demands an answer—and the answer is that many have never been filled mightily with the Holy Spirit. They can’t say, like Jeremiah, that God’s Word is in their heart like a burning fire (Jeremiah 20:9).