The totalitarian liberal left’s radical madness of “We will rule our nation or ruin our nation” is evident all across the nation.” How can you even rationalise with someone of this unreasonable and wicked mindset? It is a war of resistance and rebellion against the Bible and the American Constitution.

Listen to this compelling quote from Abraham Lincoln in his 1860 speech on the abolition of slavery where he outlines the attitude of the slave owners, which is directly related to the totalitarian left’s attitude today.

“Your purpose then plainly stated is that you will destroy the government unless you be allowed to construe and enforce the constitution as you please when all points in dispute between you and us. You will rule or ruin in all events.” —Abraham Lincoln

There is a level of hatred and resistance now in our nation that is beyond natural. It is of the demonic realm.

This all began building momentum after the election of President Donald Trump on that fateful day for all Democrats in November 2016. The defeat of Hillary Clinton loosened the grip on socialism and atheistic communism and the complete remaking of Barack Obama’s America.

This is the reason the day after the inauguration you heard influential celebrities like Madonna saying she has dreams of the White House burning down and being destroyed. It’s the reason other popular figures use such derogatory language and profanities against our president. Remember the image, still so clear in my mind, of the woman holding a model of the bloody head of Donald Trump in her hand? 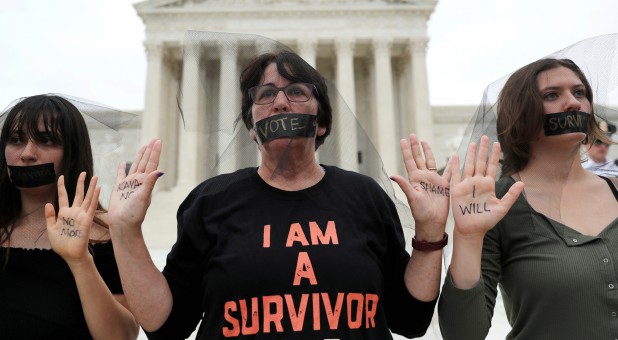 That is pure demonic hatred. It is inhumane. It speaks of the characteristics outlined in an evil, last-days people:

It is not normal. It is a murderous Satanic spirit. Never in my lifetime or perhaps the entire history of our nation have we seen this kind of disrespect and dishonour for the highest office in the land. It is demonic filth and hatred.

This irrational and senseless attitude, which borders on insanity, is the prevailing spirit in our nation. It’s like a virus. The ungodly media is shaping the minds of multitudes and spreading this virus. That’s why you had the desperation to find collusion with the Russians, which, one Washington reporter, after two years of investigation, says turned up no evidence at all. Zero. Zilch. Nada. But just as with the Kavanaugh hearings, it’s never been about evidence. It’s about smearing, undermining, distorting the facts and character defamation of the truly upright.

When you have such insensible, corrupt and lawless leaders and rulers in our nation, you are looking at an unending war that is not going to be stopped anytime soon, even if conservatives win the midterms. A battle has been won, but the war continues. This is already a large leaven in our nation. It’s too big a ship to turn in one election; and honestly, I’m not even sure it can be turned anytime soon.

This is an unending war against American patriotism, the rule of law and fair play. But most of all, it is a war of resistance and rebellion against the Bible and our Constitution. There is no method to this radical liberal madness of “we will rule our nation or ruin our nation.” How can you even rationalise with someone of this unreasonable and wicked mindset?

The totalitarian left threatens democracy and government in America. It also more importantly, threatens our Judeo-Christian heritage. It is further evidence we are in the “last days”. Satan understand his time is short and he intends to inflict us much damage as possible on God’s creation.