“And even as they did not like to retain God in their knowledge, God gave them over to a debased mind, to do those things which are not fitting” (Romans 1:28).

Just 26% of Gen X and 16% of millennials believe that when they die, they will go to Heaven only because they confessed their sins and accepted Jesus as their saviour, compared to nearly half of the generation before them, a new study has found.

Researchers found that among other recent generations, millennials have gone farther in cutting ties with traditional Christian views and normative biblical teaching. For example, nearly half of all boomers believe that when they die, they will go to Heaven only because they confessed their sins and accepted Jesus as their Savior, compared to only 26% of Gen X and 16% of millennials.

A staggering 90% of builders believe you treat others as you want them to treat you, while less than half of millennials agree.

The study also found that overall, younger Americans are significantly more likely than the two previous generations to embrace horoscopes as a guide and Karma as a life principle, to see “getting even” with others as defensible, to accept evolution over creation, and to view owning property as fostering economic injustice.

Researchers warn that the beliefs and behaviors of younger Americans, especially millennials, “threaten to reshape the nation’s religious parameters beyond recognition.”

“In fact, this radical spiritual revolution has created a generation seeking a reimagined world without God, the Bible, or churches,” they wrote.

Mankind is becoming increasingly oriented away from the knowledge of the God who expresses His mind and nature through the Ten Commandments. God’s law lays down a path of conduct and lifestyle that is increasingly out of sync with the path of human nature.

I believe this is a significant end times sign as Jesus warned us in the “last days” before He pours out His wrath on an unrepentant world. Christians would be hated and many who had taken the Christian label will fall away when persecution of Christians intensifies.

“Then they will deliver you up to tribulation and put you to death, and you will be hated by all nations for my name’s sake. And then many will fall away and betray one another and hate one another. And many false prophets will arise and lead many astray. And because lawlessness will be increased, the love of many will grow cold.” Matthew 24:9-12

More good sense from Michael Todd on church. Michael says many house churches stream Transformation Church’s services and use them to supplement small-group discussions. He’s very encouraged by this development, saying it reminds him of both the early church and Netflix all at once.

“It takes me back to Acts 2:42, where people gathered in homes, shared what they had, read the apostles’ teachings and talked about it,” Todd says. “Well, that’s what they’re doing on social media. They’re sharing about it. Friends are finding out about it. … We’re not facilitating it or doing anything. The reason Netflix blows up is because they provide content, but you decide how you want to watch it and how you want to use it. And as we’ve done that, we’ve seen salvation skyrocket. We’ve seen people get baptized. We’ve seen people go from being drug addicts or in different lifestyles or shacking up to being convicted or getting married.”

Transformation Church has been particularly effective at reaching a diverse cross-section of young Millennials and Generation Z, a group often described by demographers as uninterested in religion. Todd disputes that point; he says what they are really uninterested in are frauds.

“They’re leaving the church because the church, in many respects, is a big business and a facade,” Todd says. “That’s why they’re leaving. This is the most authentic, self-aware generation that we’ve had in a long time, and they can smell a fake from a mile away. I think that’s why I’m appealing to this generation: Because they see it’s real. It’s authentic. If churches and leaders would value authenticity more, their Millennial and Gen Z attendance would go up tremendously.”

Put simply, if young adults are going to do something, they want to be 100% all-in, without any reservations. They don’t want to play church politics, pretend to be someone else or compartmentalize Christianity to Sunday meetings. They want to be free to be fully who God created them to be and hold nothing back in pursuit of Jesus. Because of that, Todd believes they can represent a threat to some “old guard” Christian leaders, but that they can also change the world for God.

“Nobody can tell me Millennials are not interested in God,” Todd says. “They’re not interested in a big business with no power. They can’t do that. …These young people? If they’re committed to something, they’re getting a tattoo of it, they’re changing their license plates to “SOLD OUT,” they’re telling all their friends. And so, it’s a bigger decision because they can’t do anything halfway.”

Todd says the beautiful thing about Transformation Church is that it’s as diverse as the kingdom of God. Whether young or old, digital or in-person, black or white, the movement is united around loving and obeying Jesus. And Todd says it’s his honor to serve as their pastor.

The following abbreviated insightful article is by Michael Snyder. He is a Republican candidate for Congress in Idaho’s First Congressional District.

“Americans are increasingly embracing socialism, and this is particularly true for young adults under the age of 30.

Of course, our society has already been very heavily socialised. We have been trained to believe that if a problem exists, then it is the job of government to fix it, and over time government on all levels of our system has just gotten bigger and bigger (and government debt in the trillions with it).

But what most Americans don’t realize is that the United States never would have become an economic powerhouse without free-market capitalism, and the further we drift away from our roots, the deeper our economic problems will become. We need leaders who are willing to stand up and proudly declare that free market capitalism works incredibly well when the shackles are taken off, and that is precisely what I intend to do.

Not too long ago, a survey of U.S. adults was conducted by the American Culture and Faith Institute, and the most disturbing thing that was discovered was that 40 percent of all Americans now “prefer socialism to capitalism.”

Support for socialism is particularly high among our young people. A Gallup poll conducted in 2016 found that an astounding 55 percent of Americans under the age of 30 “have a positive view of socialism.” Also, a Harvard University study that was reported on by The Washington Post discovered that 51 percent of U.S. adults under the age of 30 “do not support capitalism.”

These numbers help to explain why politicians such as Bernie Sanders and Elizabeth Warren have such high levels of support among Millennials. These young people were raised in schools that taught them that we have a “free-market system” in America today, even though that is not really true at all. And as economic conditions deteriorate, millions of these young people are becoming disillusioned.

The following comes from an extraordinary piece that was published by Business Insider: Wages are stagnant or falling. The costs of health care, child care and tuition continue to rise exponentially. Full-time jobs turn into contract positions while benefits are slashed. Middle-class jobs are replaced with low-paying service work. The expectations of American life your parents had when you were born—that a “long boom” will bring about unparalleled prosperity—crumble away.

Baby Boomers tell you there is a way out: A college education has always been the key to a good job. But that doesn’t seem to happen anymore. The college graduates you know are drowning in student debt, working for minimum wage or toiling in unpaid internships. Prestigious jobs are increasingly clustered in cities where rent has tripled or quadrupled in a decade’s time. You cannot afford to move, and you cannot afford to stay. Outside these cities, newly abandoned malls join long abandoned factories. You inhabit a landscape of ruin. There is nothing left for you.

Years upon years of “training” in our failing system of public education has convinced large numbers of our young people that the solution to our economic ills is to move more toward socialism.

Yet history proves that socialism simply does not work.

If we continue our steady march down the road toward socialism, we will ultimately end up like all of the other failed socialist experiments throughout history. 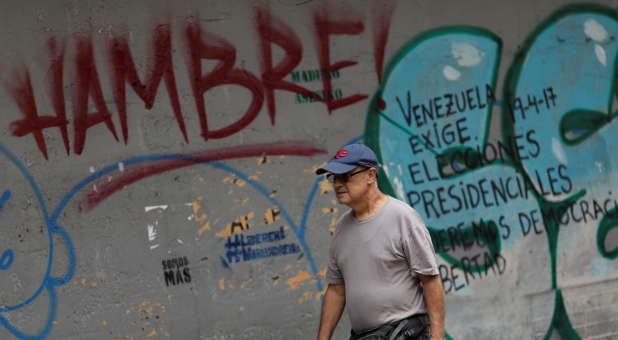 A man walks past a wall with graffiti that reads “hungry”, in Caracas, Venezuela , Aug. 3, 2017. The most recent evidence for the failure of socialism.

Let us look at the socialist alternative favoured by Sanders and Warren. The miseries, deprivations and backwardness it has inflicted on populations wherever and whenever it has been tried are boundless. They amount to the biggest empirical data set of political and economic failure in the history of humankind. In Venezuela, to take only the latest unfortunate experiment, it has meant the world’s largest oil reserves being wasted and stolen while children starve on the streets. The historical legacy of Soviet socialism, National Socialism and Maoist Communism, to cite the most egregious versions of this poisonous left-wing political ideology, is so well known that it does not need to be rehearsed here.

Even those countries that experienced the more gentle “democratic socialism,” such as modern South Africa and Brazil, socialism has allowed corrupt politicians to pilfer state industries while the poor live and die young in slums. Even in the socialized utopias of Europe, it has meant destructive youth unemployment rates, a dearth of innovation and death panels in hospitals.

Our nation is in deep, deep trouble, and it is getting worse with each passing day.

Now is the time to stand up and fight for the future of our nation, because if we don’t we may wake up one day and discover that the country we all loved so much is gone for good.”

I believe God has given America one last chance with Trump. However, unless there is revival in the church which impacts the youth and transforms communities, further judgement as outlined by Jonathan Cahn in The Harbinger will increase in intensity as “birth pangs”.