Palestinian historian Ghassan Weshah claimed in an interview on Hamas’ Al-Aqsa TV that America is on the verge of collapse and will be replaced by Islamic regimes, not China. Listen to the why he believes this will happen.

European countries like Holland are becoming Islamic purely by Muslim immigrants producing many children and the locals not even at replacement numbers.

The anarchy we see happening in America and other countries is emboldening Muslims once again as we saw for a brief time with Isis.

The Bible tells us that in the last days before Jesus returns there will be wars and rumours of wars. I believe the next major war we will see in the Middle East is the battle outlined in the prophecy from Daniel 8. It is a battle between Iran, the ram (Shia) and Turkey, the male goat (Sunni) to establish who will lead the final Muslim Empire (Erdogan outspoken about a Revived Ottoman Empire). Turkey, the male goat crushes Iran, the ram. Then we learn it is broken up into four nations (perhaps the West or Russia or both will not countenance another Ottoman Empire) and out of one of them the prophesied Antichrist will arise to power.

“Therefore the male goat grew very great; but when he became strong, the large horn was broken, and in place of it four notable ones came up towards the four winds of heaven. And out of one of them came a little horn (Antichrist) which grew exceedingly great toward the south, toward the east , and toward the glorious land (Israel).” Daniel 8:8-9

Seems like an outrageous claim, but it is hard to discount the case made by Nelson Walters, a friend and a man I greatly admire. I am confident you will agree this is another great video from Nelson. It’s on an amazing prophecy which reveals that we are living in Biblical end times with Jesus return less than 100 years distant. Nelson mentions the early church father, Barnabus, but I would include Justin Martyr, Irenaeus and Lactantius. They all held to the sexta-septamillennial construct which is that the days of creation are prophetically one thousand years (with the Lord one day is as a thousand years). Hence, six thousand years of earths history is followed by the Millennial Reign of Jesus Christ. At the end of which will be the destruction of this earth, the second resurrection and the White Throne Judgement. The new heaven and new earth will then herald the start of the eighth thousand year of man’s history and eternity with our Lord and Saviour, Jesus Christ.

This Scripture from 2 Peter is such an important “end times” pointer.

“That you may be mindful of the words which were spoken before by the holy prophets, and of the commandment of us, the apostles of the Lord and Savior, knowing this first: that scoffers will come in the last days, walking according to their own lusts, and saying, “Where is the promise of His coming? For since the fathers fell asleep, all things continue as they were from the beginning of creation.” For this they wilfully forget: that by the word of God the heavens were of old, and the earth standing out of water and in the water, by which the world that then existed perished, being flooded with water. But the heavens and the earth which are now preserved by the same word, are reserved for fire until the day of judgement and perdition of ungodly men.
But, beloved, do not forget this one thing, that with the Lord one day is as a thousand years, and a thousand years as one day.” 2 Peter 3:2-8

Nelson Walters presents undeniable proof of a Road Map provided by Jesus to His disciples in the Olivet Discourse covered by Matthew, Mark and Luke and then confirmed in Revelation 6.

Make sure you share this information as widely as possible and sign up for Nelson’s other “end times” videos. You will be convinced as I am that we are in the “last days”, We need to start preparing for Jesus return by living with an eternal focus.

The Military Ordinance Penetrator may spell the end of Iran’s nuclear ambitions if the Islamic Republic continues on its current path toward weapons grade uranium.

As Iran moves further away from the 2015 nuclear deal, most recently with its announcement last week that it will start developing  “all kinds” of centrifuge machines that can more quickly enrich uranium, the U.S. Army has a solution if the situation deteriorates into a military confrontation  – the MOP (Military Ordinance Penetrator).

The New York Times Magazine revealed last week in a special feature “The Secret History of the Push to Strike Iran,” that America had developed a plan 10 years ago under the Obama administration to cripple Iran’s nuclear capability through military means – including building a mock-up of a major Iranian nuclear site and then successfully blowing it up.

According to The New York Times piece, the Israelis wanted the MOP to deal with Fordow, but the Obama administration (and the Bush administration before it) refused to give it to them, as the U.S. wanted to discourage Israel from carrying out an attack on Iran, which it feared would drag it, too, into a military confrontation with the Islamic Republic.

But this didn’t stop the U.S. from developing its own plans to attack Iran’s nuclear program. Under the Obama administration, the U.S. built up its forces in the Gulf region in preparation for a possible Israel pre-emptive strike.

It also built a replica Fordow in the southwestern U.S. and tested its MOP. In order to show that America was serious about confronting Iran, (and to convince Israel it didn’t have to) then Secretary of Defense Leon Panetta invited Israeli Defense Minister Ehud Barak to see a video test of the 30,000-pound weapon.

Last May, the U.S. released a video of the MOP in action (it’s now known if this was the same video shown to Barak).

But the video was released the very same month that the Trump administration announced its decision to leave the 2015 nuclear agreement, opening the possibility that the video was meant as a message to Iran.

Food Shortage Warnings Are Already Starting To Appear, And Now Tropical Storm Barry Is Going To Rip Through America’s Heartland 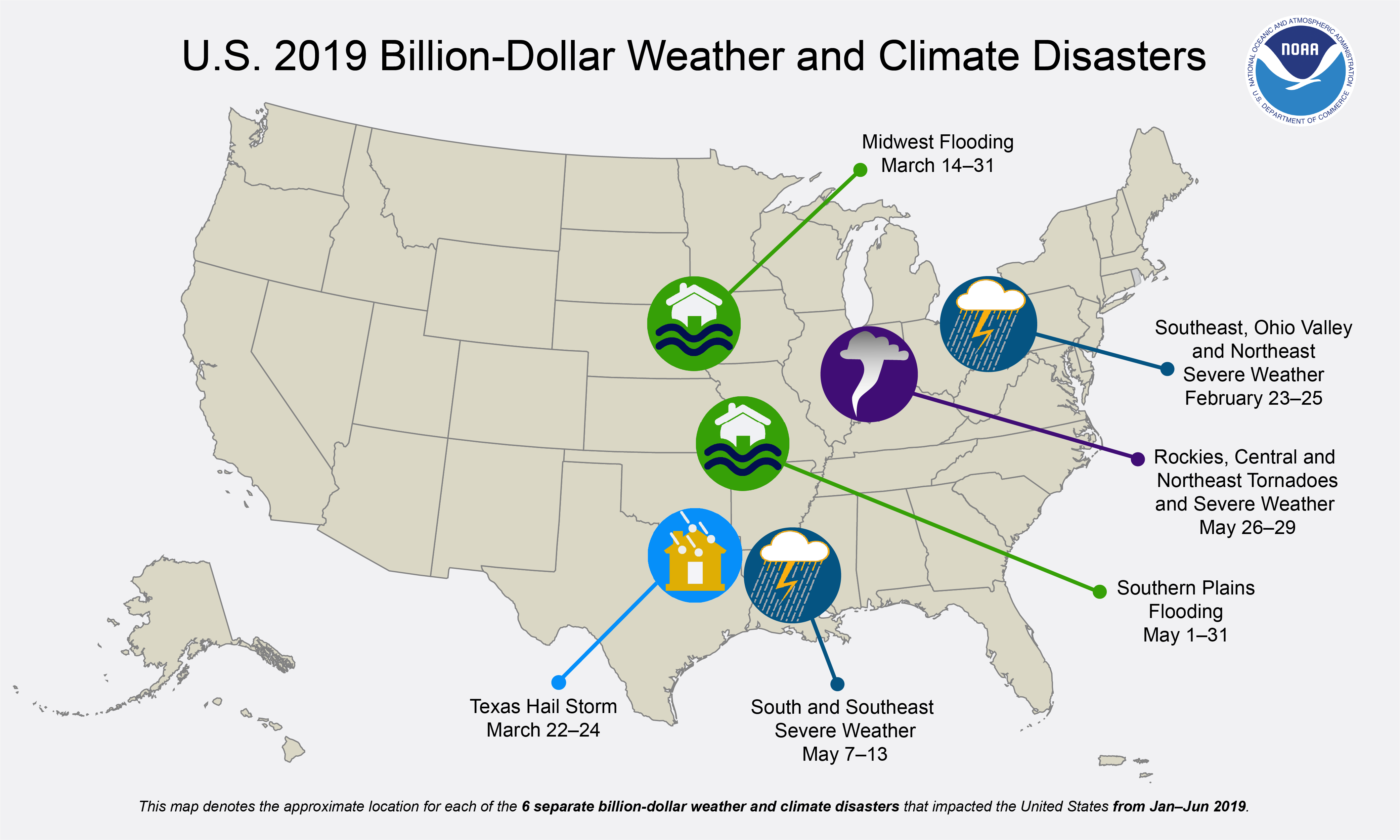 “But you, Daniel, shut up the words, and seal the book until the time of the end; many shall run to and fro, and knowledge shall increase.” Daniel 12:4

The biggest global communication network roll out in history is about to begin. This prophecy given to Daniel by the angel Gabriel takes on new meaning when we consider what is unfolding in our time, in terms of increase in knowledge. There is an urgency now, to look at the 70 Weeks prophecy given to Daniel (Daniel 9:24-27) in the light of the Revelation given to John who was told contrary to Daniel, do not seal the words of this prophecy for the time is at hand.

“And he said to me, “Do not seal the words of the prophecy of this book, for the time is at hand” Revelation 22:10

I’m sure you’ve heard about the coming fifth generation mobile network — or 5G — roll-out. You might have heard about the incredibly fast download speeds 5G allows, the low latency, and the awesome streaming power.

Everything in your entire house…wirelessly connected and communicating

Just this month, Amazon announced a new hardware product. It’s a microwave that can listen to your voice commands. The microwave wirelessly connects to Amazon’s virtual assistant, Alexa.

Alexa can already interact through voice, play music, set your alarm and update you on the news, sport and weather. Now, you can tell her to cook your potatoes the way you like them.

Wired just quoted Amazon’s senior vice president of devices as saying, ‘Just think, one day there will be thousands of these things in the home.’ We can add your office, gym and anywhere else you care to look.

LG is rolling out Google Assistant, which will have your TV talking to you. You’ll be able to change channels, check the weather and even organise your weekly shopping – without moving off the couch. And goodbye to hunting around the room looking for your remote control!

There could be 300 million smart speakers like Alexa sold by 2022.

Also coming are smart thermostats, baby monitors, security systems…and the list goes on. Billions of small, connected sensors are going to get rolled out everywhere.

Parking spots will know when cars enter and leave.

Farmers will know exactly how much fertiliser their plants need. Insurers might even know how close your car is to breaking down. The applications are endless.

The impending rollout of 5G networks worldwide happening now is going to finally usher in the long-awaited and talked about Internet of Things (IoT) reality.

This is where all devices and things are connected to the internet, communicating and sharing data.

This is what can make self-driving cars a reality…amongst many other things.

Vodafone in the UK just demonstrated a holographic phone call. A young football fan chatted with a player in front of a live audience — despite the two having the conversation being physically 190 miles apart! Already mobile data traffic is exploding worldwide as shown by this graph. Well, 5G is going to allow the world to send massive amounts of data at incredibly fast speeds. The download speeds are going to be 10 to 100 times faster than 4G.

In September, The Australian quoted Telstra’s head of mobiles Kevin Teoh. He said, ‘We expect the implementation of 5G technology will facilitate applications and usage for mobile handsets that have not yet been imagined.’

The Financial Times calls it ‘…a game changer for humanity’.

And MIT Technology Review calls it ‘…the next technological revolution’ and a ‘…paradigm shift, akin to the shift from the typewriter to the computer’.

Jesus told us what it would be like before His second coming. “As in the days of Noah and Sodom and Gomorrah.”

Are you ready for Jesus return, are you prepared for the tribulation, even great tribulation in the last 2 1/2 years before the elect are raptured to heaven and the wrath of God is poured out on the ungodly.  Both books of the Bible, Daniel and Revelation, give us a detailed account of events in the last seven years prior to Jesus return to this earth, and they are unfolding just as God said they would.