America is still reeling from a series of major disasters in recent weeks, and now another one has hit. 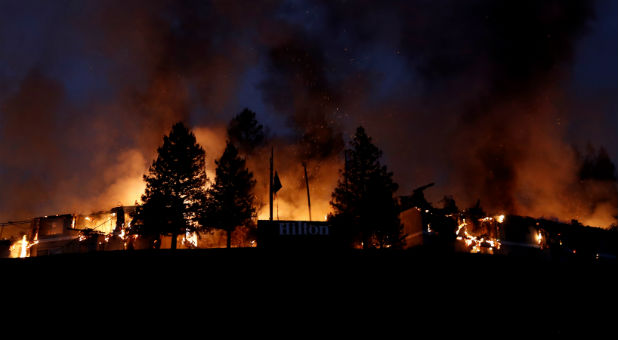 At this moment, an enormous firestorm is consuming tens of thousands of acres in eight counties in northern California. Wind gusts of up to 50 mph are rapidly driving 15 large wildfires across Napa, Sonoma, Lake, Mendocino, Yuba, Nevada, Calaveras and Butte counties, and the devastation taking place is being described as “like Armageddon”.

Ultimately, it looks like this is going to be one of the worst months for wildfires in the history of the state, and all of this comes on the heels of Hurricane Harvey, Hurricane Irma and the Las Vegas shooting. Ever since late August, it seems like all hell has broken loose in America.

Violence is on the rise. The tensions of inter-racial relationships seem to be increasing rather than growing better. Political differences divide America like never before in its history. Internationally, wars and the rumour of wars abound. Natural catastrophes are occurring on a record-breaking scale.

Jesus said lawlessness would abound in the last days, and we see it on every hand. Many, even in the church, want to cast off anything that brings restraint to their lifestyle choices. Under the guise of being free, they mistakenly act as if freedom equals a life without boundaries. But real freedom isn’t the right to do our own thing, but the enabling of grace to do the God-thing! Jesus also predicted that with a lawless attitude, true love would grow cold. When people live as their own standard, they inevitably chill in their love toward others.

Deception is on the rise even within the ranks of the church. Many seem determined to follow after signs blindly even if the source appears questionable. While signs and wonders are still valid for today, Jesus gives us a strong warning about false prophets who would come with great signs and wonders (Matt. 24:24). We dare not qualify something as being of the Lord just because it appears to be supernatural. Jesus instructed us to, “Take heed that no one deceives you” (Matt. 24:4b). The followers of Jesus must be discerning so that no one causes us to wander from the path of truth. The church must avoid both sensationalism and scepticism; living open to the miraculous working of the Holy Spirit but not ignoring affirmations, attitudes and actions that are contrary to the teachings of Jesus Christ.

Deception is not just something we guard against from false prophets. We must guard our hearts against self-deception. James says that we can hear the word, even get excited about it and “Amen” it, but if we don’t put it into practice in our personal lives—we deceive ourselves (see James 1:22).

Our challenge is to learn how to be awake and stay awake to the things of eternity while living here and now.