True Arrow Events Group is an Australian professional events business with a strong focus on mental health and rescuing our culture from the chaos. They have sponsored Dr Jordan Peterson’s speaking tour in Australia. He is speaking to packed out audiences of young men. What is his message that draws such attendance?

A professor of psychology at the University of Toronto, Dr Jordan Peterson shot to global prominence when he objected to a university edict that staff refer to students by their preferred gender pronouns. For Peterson, the issue was one of compelled speech. He will not, he says, be told what he must say, much less by people who are driven by Marxist and postmodernist motives. 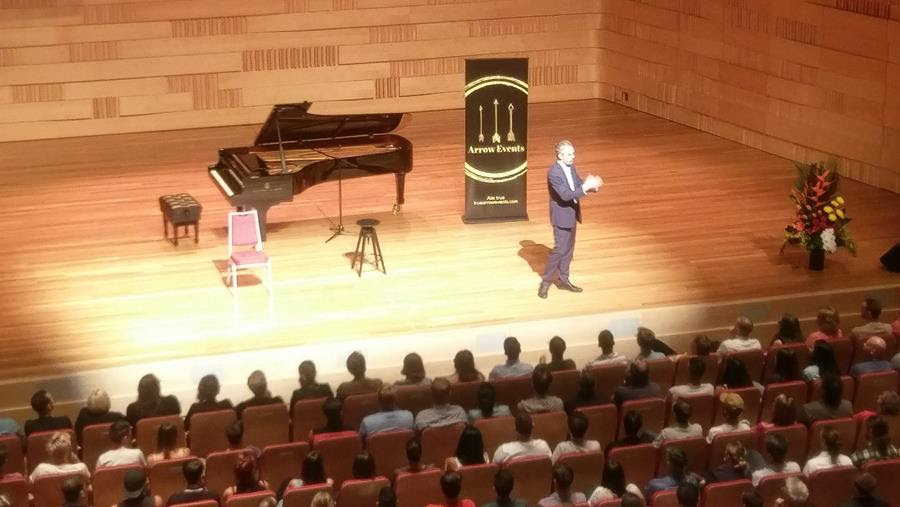 As Peterson takes the stage of his Sydney lecture, the auditorium erupts into a standing ovation fit for a hero of our times. But there is no showmanship here. As the audience resumes their seats and silence sets in, Peterson begins hesitantly. He is softly spoken, cautious, almost diminutive and yet these people are listening. I mean really listening. Nearly every one of the packed-out audience is leaning forward, totally focused, eagerly hanging on his every word. It remains this way for well over two hours.

“I like to get to the bottom of things,” declares Dr Peterson. “I mean all the way to the bottom, until you hit bedrock you can rely on.”

Peterson’s message is one of truth and meaning. In particular, he tells his audiences how to live in light of these things. It is a message of personal responsibility and self-betterment, but one that understands the vacuous postmodernism in which today’s young people are steeped, successfully tearing it down and building up some meaning in its place.

The fact that his message is literally taking the Western world by storm is testament to how hollowed out and emptied of substance we have become.

They have been left with no idea how to deal with themselves on almost every level.

Now here is a man – a father figure – who literally tells them to clean their room, stand straight with their shoulders back, “lift heavy rocks” (take responsibility), be brave, change the world, get married, be good fathers and husbands, seek truth…

They’ve never heard anything like it. And they love it.

Read the comments on Peterson’s YouTube videos. Young men in their droves are writing, “Jordan Peterson is literally my dad.” “Dr Peterson – I made my bed this morning.” One YouTube clip shows Peterson choking back tears as he tells of the young men like these who write to him.

Significantly, Christians are flocking to Peterson. Though not a Christian himself, he speaks a language that we are instantly drawn to because it relies so heavily upon Christian principles. He even teaches the Bible in his lectures.

But listening carefully to Peterson, I couldn’t help thinking of the Apostle Paul’s sermon to the Athenians on Mars Hill (Acts 17:22-34). They, too, sought bedrock.

Many of them great Greek philosophers, the men who Paul addressed were engaged in one of the greatest quests for truth and ultimate meeting. The Western cultural heritage bears witness to their work. But they had not gone deep enough. Theirs was a drilling expedition that had stopped too soon.

Paul saw, as he walked through their city, altars and idols to many gods (v23). So many of these represented realities these people had discovered – gods who imparted art and music, fertility, victory in battle. Gods of the sea, of fire, of beauty, and so forth. But surely there is something even greater, that yet lies behind all of this?

Peterson is the same. The foundations upon which he relies are the “archetypes” of psychological theory. These are said to be deep, enduring truths, held in the collective unconscious of societies throughout the ages. They find expression in narratives, religions, social norms, psychological realities, and so forth. They exist because they are true, though often we know not how or why.

In his lectures, the Bible is held up as a text in which we find the paramount expression of some of these archetypes.

Jesus, says Peterson, shows us the deep truth that, if we bear the burden of our own vulnerability to hardship and injustice willingly and without complaint, then we will be able to transcend it.

Zion, the Heavenly City on a hill, tells us that we can struggle under the weighty burdens of our human brokenness in a way that carries us upwards until we reach a place where they will be no more.

The Sermon on the Mount tells us that, no matter the pain and difficulty of our own circumstances; no matter our lack of privilege, moral character is attainable by all.

Again, I say: surely there is something even greater than archetypes?

The realities of our world are not true because they spring from Greek myth, or even from archetypes that may be expressed by those myths and other sources, like the Bible.

As Paul once said, these things are true because of God who is yet unknown to Peterson and so many of his disciples. The true and living God – the “God who made the world and everything in it, being Lord of heaven and earth” (v24). God who made the bedrock truth which lies behind the archetypes. The One “in whom we live and move and have our being” (v28) – by whom we can be transformed to become the people of character that Peterson would have his followers become.

In many ways, I felt like I was sitting in a modern-day Areopagus (v22) on Monday night. The great philosopher stood before us, leading us on our quest for truth and meaning. An audience made hungry by hollowed out, postmodern secularism, hangs on every word. Questions follow.

It would have been fitting had there been an altar to an unknown God (v23) in the corner. The room does not know it, but He is the answer to all their questions – those they have asked, and those they do not even know.

He is the bedrock they seek. The Logos by whom all things have been made, who is the light and life of men (John 1:3-4).

There is a hungry, needy, confused generation growing up in Australia. The Dr Jordan Peterson’s of this world are feeding them something, but I can’t help thinking: why not the church?

If it is a message of truth and meaning we crave, then this increasingly unknown God, revealed in the pages of scripture, is the answer because He is true, and He has given all things their meaning.