“We have examined all the options and Israel’s final resort is to strike at Hamas,” Defence Minister Liberman said.

This report by Jack Gold, World Israel News, on rumour of war with Israel fits what Jesus said in the Olivet Discourse would be evident in the last days in the lead up to the last seven years prophesied by Daniel (70th week) and confirmed in Revelation.

“And you will hear of wars and rumours of wars. See that you are not troubled; for all these things must come to pass, but the end is not yet. For nation will rise against nation, and kingdom against kingdom. And there will be famines, pestilences, and earthquakes in various places. All these are the beginning of sorrows.” Matthew 24:6-8

Egyptian mediation has failed and Israel is on its way to war. That was the message Defence Minister Avigdor Liberman delivered Monday to the Knesset Foreign Affairs and Defence Committee.

Israel has recently seen an increase in the intensity and the volume of violence and attacks emanating from Gaza, which culminated in Wednesday’s rocket attack on Israel which destroyed a home in Beersheba. 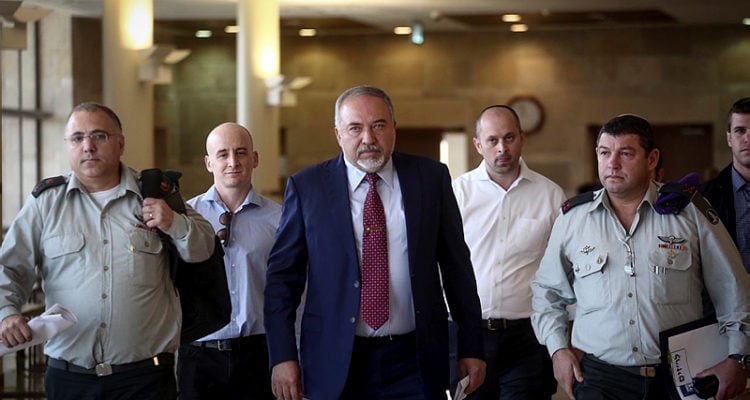 Defence Minister Avigdor Liberman (C) arrives to a Defense and Foreign Affairs Committee meeting at the Knesset, on October 22, 2018.

Palestinian riots on Israel’s border with Gaza are not “popular protests” as Hamas depicts them but rather carefully orchestrated violence organised by the terror group, he said.

“Fifteen thousand people do not show up by foot at the border fence,”  Liberman said. “We have been talking since March 30 about the tens of millions [of shekels] Hamas has spent … They pay for every person killed $3,000, each seriously wounded $500, and a moderately injured [rioter receives] less than $200.”

No deal with Hamas

“When we talk about an arrangement and I’m expressing my opinion here – I do not believe in any arrangement with Hamas. It does not work, it has not worked in the past, it will not work in the future,” the defence minister stated.

Israel has “reached a situation where there is no alternative – anything other than the hardest, heaviest blow that we are capable of dealing Hamas in the Gaza Strip – will not help. We are in a state of ‘no choice,’” he added. “We have arrived at that point where we need to arrive at decisions, we have examined all the options.”

Hamas has called for war on Israel, and Hamas means what it says, he noted, and “therefore, we need to reach clear conclusions, and beyond the conclusions we need actions.”

The Security Cabinet met Wednesday night to consider its response to a rocket attack from Gaza. Its discussion was not made public.