The Bible is coming to life beyond belief in the heartland of the Buckeye state. Clergymen from Richland County, Ohio, are reclaiming the nexus between church and state and proving they are the juggernaut that can bring social change to their region.

Leading clergymen from over 100 congregations across Richland County sent a letter to local and state school officials calling for civil disobedience to the Obama restroom mandate. Citing the mandate jeopardised privacy and safety of women and children, these ministers took a bold stand when many were afraid to challenge a hostile federal government. 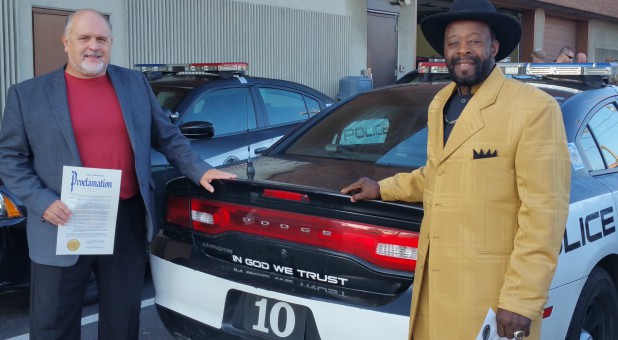 Pastors pose with police car with national motto for Clergy Appreciation Month in 2017.

Bountiful August rains in the midst of a five-month drought in 2016 came at just the right time. This rainfall had a ripple effect, bringing an unusual abundance of milk and honey, and propelling a robust harvest. Despite being the second hottest August on record, milk productivity countywide increased 43 percent from the previous August. Meanwhile, swarms abounded for a bee population still stinging from the colony collapse disorder, with one prominent beekeeper declaring the summer of 2016 as “the best bee season in a decade.”

“Showers of blessing” became new buzzwords to come out of a sticky situation. In spite of the drought, one farmer exclaimed “In 74 years of farming, I have never had 80 bushels of soybeans an acre like I did in 2016!” Another farmer proudly boasted of having five cuts of hay that year. … but that’s not all.

This extraordinary turn of events occurred one month after clergy drew national attention for challenging the Washington, D.C., establishment. This same month also saw a sudden exodus of witchcraft with two out of the three area psychic stores closing. Legislative efforts to attack religious freedoms were also averted. And despite an infant mortality rate nearly twice the national average, no cases of premature infant deaths were recorded. Last but not least, the clergy’s milestone moment saw no traffic fatalities during the same summer vacation month.

According to the ancient promises described in Deuteronomy 28, simple obedience by pastors became a pivot point to set these wheels of blessing in motion; one act of faith can change a nation.