Tens of thousands of Catholics and several thousand Muslims attended an unprecedented public celebration of Mass on Tuesday by Pope Francis, the first pontiff in history to visit the Arabian peninsula.

About 135,000 worshippers gathered in Zayed Sports City stadium in Abu Dhabi, the capital of the United Arab Emirates, to see the pope, who is in the Gulf Arab country to promote inter-faith dialog. 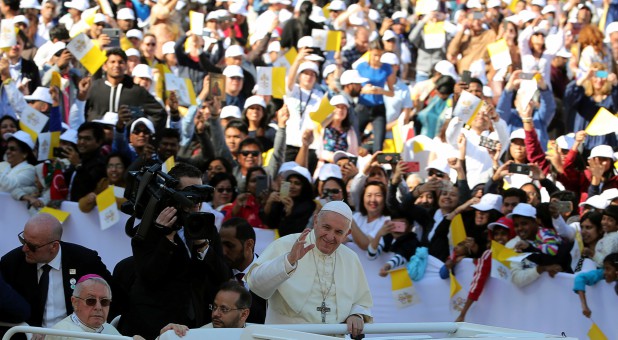 Catholics from about 100 nations were expected to attend the Mass, along with about 4,000 Muslims, including government officials, organisers said. We should not be surprised as the pope has said many times that all major religions are meeting God in different ways – apostasy of the first order. Jesus said, “I am the way the truth and the life. No one comes to the Father except through Me” John 14:6.

The pope, who arrived on Sunday at the invitation of Abu Dhabi’s crown prince, has used the visit to condemn regional wars, including that in Yemen, and to call for greater cooperation between Christians and Muslims.

Newspapers in Saudi Arabia, where churches are banned, ran pictures of Francis’ meetings with the grand imam of Egypt’s Al-Azhar mosque in Abu Dhabi on Monday and Abu Dhabi’s crown prince and Dubai’s ruler.

The Pope entered the stadium in a white open top jeep to roars from the crowd. People wearing white baseball caps emblazoned with the visit logo packed the stadium stands and snapped pictures on their smartphones.

The Mass was “a moment of divinity that will stay with me forever,” said Josephine Periera, a 68-year-old retired teacher who had travelled from the Indian Ocean nation of Sri Lanka to attend.

As I have said before this pope could well be the False Prophet the Bible prophesies in the “last days” who will lead millions astray. What is unfolding also fits with an Islamic Antichrist that the False Prophet teams up with; expect him to emerge speaking PEACE.