The abomination of desolation is one of the primary end-time signposts Jesus emphasizes in his Olivet Discourse teaching Matthew 24 & 25, Mark 13, and Luke 21. And we should not forget Daniel 9:27 spoken of by Jesus in Matthew 24:15. This prophecy should be a central part of the Messianic community’s broader teaching on eschatology, especially as we draw closer to the return of Jesus.

The fact that Jesus drew an analogy between the past actions of Antiochus and the future actions of the Antichrist, further proves that the abomination of desolation will involve events that transpire within the Temple’s holy place while the Temple is still intact.

Luke also adds some important details that are left out of Matthew and Mark’s accounts. We read:

Luke does not mention “the abomination of desolation” in the holy place. Instead, he mentions that Jerusalem will be “surrounded by armies” and invaded. This invasion will lead to a time of “great distress” and a period of captivity for the Jewish nation. At the midpoint of the 70th week, right after the Antichrist fulfills the abomination of desolation prophecies of Daniel, his armies will conquer Israel, and the nation will remain under the control of the Antichrist until Jesus returns (Luke 21:27).

Hence, Luke 21:20–24 adds the important detail that not only will people see the Antichrist in the Jewish sanctuary at this time, but they will also see Jerusalem surrounded by armies. When the Lord’s people in Jerusalem witness these events, they should recognize them as a sign of imminent destruction, and as a final opportunity to “flee to the mountains” (Lk. 21:21).

As difficult as the Time of Jacob’s Trouble will be, Revelation 12:6 and 12:13–16 do also make clear that a Jewish remnant that heeds Jesus’ advice to “flee to the mountains” will be protected and preserved in the wilderness during the last half of the 70th week. God’s preservation of the Jewish remnant during the final half of the 70th week also raises an important practical point for the followers of Jesus today. We need to alert Jews, particularly Messianic Jews to the protection that is available to them during the great tribulation (3 1/2 years).

The abomination of desolation will lead to Israel’s final period of purging and discipline before the Messianic Age. According to Daniel, this time will last for three-and-a-half years (1,260-1,290 days; Daniel12:11). Also, Daniel 12:7 says, Israel will suffer at the hands of the Antichrist “for a time, times, and half a time; and as soon as they finish shattering the power of the holy people [i..e Israel], all these events will be completed,” 1,290 days after “the abomination of desolation” is set up (Daniel 12:11–13).

This information is extracted from Travis Snow’s excellent book “The Seventy Weeks Jubilee”.

In Matthew 24, known as the Olivet Discourse, Jesus describes the end of days. The time before He returns to earth. He lays it out bare for His disciples and for you and me.

It starts with a stunning prediction—the utter destruction of the temple in Jerusalem. “not one stone shall be left here upon another, that shall not be thrown down.”

“Jesus left the temple and was going away when his disciples came to point out to him the buildings of the temple. But he answered them, “You see all these, do you not? Truly, I say to you, there will not be left here one stone upon another that will not be thrown down.” Matthew 24:1-2

Jesus gave this prediction knowing that it would be fulfilled just 70 years on. It would give credence to the rest of the “end times” prophecies that would precede His second coming to earth.

When Jesus gave this prophecy about the temple in Jerusalem the disciples were devastated and they came to Jesus with this question:

“Tell us, when will these things be, and what will be the sign of your coming and of the end of the age?”

The following is just a small portion of what Jesus told them and none of it in the natural is good news. If you do not have the Holy Spirit to enable you to live the Christian life you will be one of those that will fall away exactly as prophesied, “the love of many will grow cold“.

“And Jesus answered them, ‘See that no one leads you astray. For many will come in my name, saying, ‘I am the Christ,’ and they will lead many astray. And you will hear of wars and rumors of wars. See that you are not alarmed, for this must take place, but the end is not yet. For nation will rise against nation, and kingdom against kingdom, and there will be famines and earthquakes in various places. All these are but the beginning of the birth pains.
“Then they will deliver you up to tribulation and put you to death, and you will be hated by all nations for my name’s sake. And then many will fall away and betray one another and hate one another. And many false prophets will arise and lead many astray. And because lawlessness will be increased, the love of many will grow cold. But the one who endures to the end will be saved. And this gospel of the kingdom will be proclaimed throughout the whole world as a testimony to all nations, and then the end will come.”

ANOTHER GREAT PRESENTATION FROM NELSON WALTERS: OUR BLESSED HOPE

Christians need to understand that Jesus told His disciples (Olivet Discourse in Matthew, Mark and Luke) that six events will precede His return. You need to know what they are.

So if you liked Nelson’s teaching, hit a couple of the share buttons below. This is a terribly misunderstood doctrine, and sharing it will be helpful to multitudes of brothers and sisters.

The famine in Yemen in the spring of 2017 is threatening over 7 million[1] people; over 3.3 million children and pregnant or lactating women suffer from acute malnutrition.[2] Over 100,000 affected children are in Al Hudaydah Governorate with the city of Al Hudaydah worst affected area of the province.[3] According to the Norwegian Refugee Council the famine in Yemen will soon reach “biblical proportions”.[4] 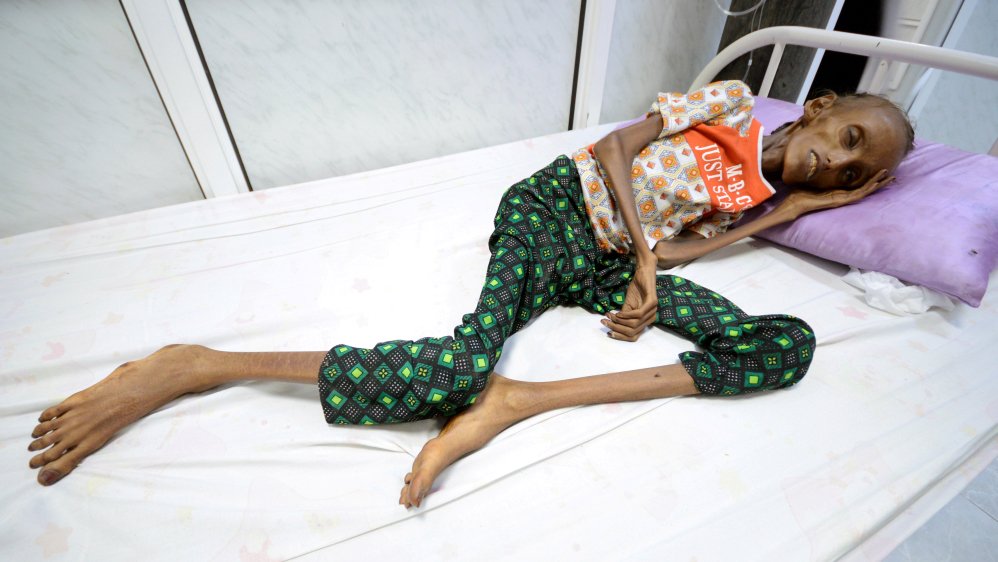 The famine is being compounded by an outbreak of cholera which is causing 5000 new cases daily.[5]

“It will be the largest famine the world has seen in many decades, with millions of victims.” Al Jazeera English

Not just Yemen, the world faces the largest humanitarian crisis since the United Nations was founded in 1945 with more than 20 million people in four countries at risk of starvation and famine, the UN humanitarian chief has said.

Stephen O’Brien told the UN Security Council on Friday that “without collective and coordinated global efforts, people will simply starve to death” and “many more will suffer and die from disease”.

He urged an immediate injection of funds for Yemen, South Sudan, Somalia and northeast Nigeria plus safe and unimpeded access for humanitarian aid “to avert a catastrophe”.

Signs Jesus gave of His second coming in the Olivet Discourse

What about ECONOMIC collapse?

LONDON – When the banking crisis crippled global markets seven years ago, central bankers stepped in as lenders of last resort. Profligate private-sector loans were moved on to the public-sector balance sheet and vast money-printing gave the global economy room to heal.

Time is now rapidly running out. From China to Brazil, the central banks have lost control and at the same time the global economy is grinding to a halt. It is only a matter of time before stock markets collapse under the weight of their lofty expectations and record valuations.

The China slowdown has sent shock waves through commodity markets. The Bloomberg Global Commodity index, which tracks the prices of 22 commodities, fell to levels last seen at the beginning of this century.

Billions of dollars in loans were raised on global capital markets to fund new mines and oil exploration that was only ever profitable at previous elevated prices.

The great props to the world economy are now beginning to fall. China is going into reverse. And the emerging markets that consumed so many of our products are crippled by currency devaluation. The famed Brics of Brazil, Russia, India, China and South Africa, to whom the West was supposed to pass on the torch of economic growth, are in varying states of disarray.

As central banks run out of silver bullets then, credit markets are desperately seeking to reprice risk.

Interest rates have been held at emergency lows in the UK and US for around six years. The U.S. is expected to move first, with rates starting to rise from today’s 0 to 0.25 per cent around the end of the year. Investors have already starting buying dollars in anticipation of a strengthening U.S. currency. U.K. rate rises are expected to follow shortly after. Borrowers have not factored in an interest rate rise and will be caught out.

The U.K. stock market is in its 77th month of a bull market, which began in March 2009. On only two other occasions in history has the market risen for longer. One is in the lead-up to the Great Crash in 1929 and the other before the bursting of the dotcom bubble in the early 2000s.

U.K. markets have been a beneficiary of the huge balance-sheet expansion in the U.S. US monetary base, a measure of notes and coins in circulation plus reserves held at the central bank, has more than quadrupled from around US$800 billion to more than US$4 trillion since 2008. The stock market has been a direct beneficiary of this money and will struggle now that QE3 has ended. In the U.S., Professor Robert Shiller’s cyclically adjusted price earnings ratio — or Shiller CAPE — for the S&P 500 stands at 27.2, some 64 per cent above its historic average of 16.6. On only three occasions since 1882 has it been higher — in 1929, 2000 and 2007.