Speaking before the annual American Israel Public Affairs Committee conference in Washington Tuesday, Israeli Prime Minister Benjamin Netanyahu warned of a clear and present danger facing the world: the threat of a nuclear Iran. It was good to hear him quote Scripture  – the Book of Esther. 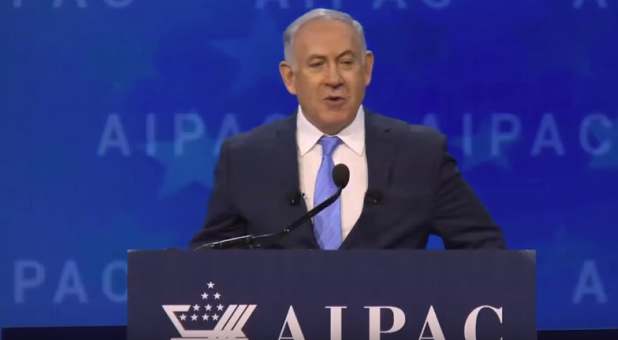 “Darkness is descending on our region,” Netanyahu warned, naming “radical tyranny” as the force behind Tehran’s quest to build an “aggressive empire” that includes Iran, Iraq, Syria, Lebanon, Gaza, Yemen and more—all in a quest to seek Israel’s destruction.

He condemned President Obama’s 2015 Iran nuclear agreement and said Iran its proxies are looking for ways to attack Israel.

“Last week, we read in the Book of Esther about an earlier Persian attempt to exterminate our people. They failed then. They’ll fail now.”

“In addition to moving its army, its air force, its navy to Syria to be able to attack Israel from closer hand—it’s also seeking to develop, to build precision-guided missile factories in Syria, Lebanon against Israel. I will not let that happen,” he vowed, before praising President Donald Trump for his firm stance against a nuclear Iran.

“President Trump has made it clear that his administration will not accept Iran’s aggression in the region. He has made clear that he too will never accept a nuclear-armed Iran. That is the right policy. I salute President Trump on this,” Netanyahu said.

“And the president has also made it clear that if the fatal flaws of the nuclear deal are not fixed, he will walk away from the deal and restore sanctions,” he added. “Israel will be right there by America’s side, and let me tell you, so will a hundred countries in the region.

Netanyahu concluded by reminding those present that the “wellspring” of the U.S. and Israel’s enduring friendship was their shared values, under girded by a strong faith in God.

“They come from a certain book—a great book, a good book. It’s called the Bible,” Netanyahu told the audience. “It says that all of us are created in the image of God.”