Political commentator and Daily Wire editor-in-chief Ben Shapiro spoke April 25th, 2018 to 11,000 students at Liberty University about the profound biblical values that created America, and why they’re worth defending today. 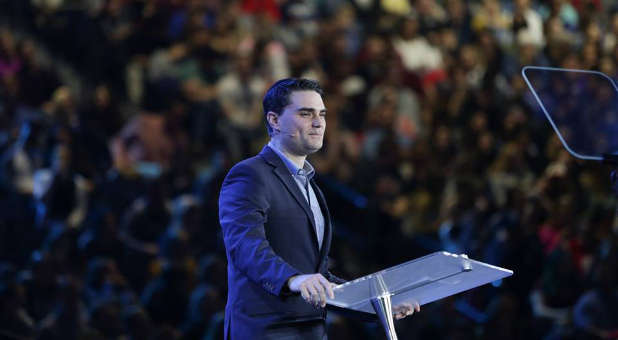 “America was built on a fundamental idea… that human beings are made in the image of God,” Shapiro said.

Shapiro argued that those values are under attack because Americans now value collectivism over virtue.

“Collectivist philosophy, however, thinks differently—they expect us to give our individual striving for truth,” he said. “All we have to do is trade our individual responsibility for the comfort of collective power. … We can avoid that (individual) struggle by handing over all power to a nanny state.”

Shapiro believes collectivism breeds death and pointed to the case of Alfie Evans, a toddler with an undiagnosed brain condition in the United Kingdom.

The British government has forbidden his parents from seeking medical care outside of the country even though an Italian hospital has offered to treat him. The British courts have ruled it is in Alfie’s best interest to die.

“Collectivists see the state as the source of our morals, and our families as obstacles standing between individuals and their master. That’s exactly what’s happening with Alfie Evans, where bureaucrats are standing between parents and their child, saying that they know best that a child has

Shapiro, a vocal pro-life advocate, explained that collectivism doesn’t just murder babies outside of the womb, it murders baby within the womb through abortion.

“So, the question becomes how exactly do we go about restoring the Judeo-Christian tradition upon which the nation was built? How exactly do we bring back the philosophy of the Founders and restore their promise?” he continued.

Shapiro received a standing ovation for his remarks. The truth wins out.