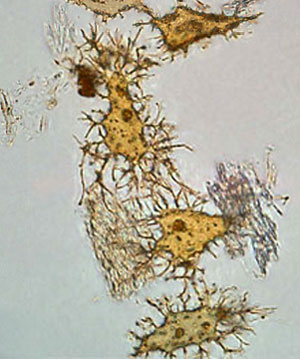 Following the most rigorous tests and checking of data, many evolutionists now admit the existence of such dinosaur soft tissue and organic material in not just one or two specimens, but well over thirty. They now have to explain how extremely delicate structures could have been preserved over incredibly vast time periods.

E.g, In 2009, researchers reported that they had found the fossilised remains of a fish brain—dated at 300 million years by evolutionary standards. John Maisey, the lead author, found it remarkable that brain tissue was preserved by fossilisation, since it consisted mainly of water.
Then, in 2016, researchers studying the remains of an Iguanadon-like creature reported not just fossilised brains, but unfossilised brain tissue. Dated by evolutionists at 133 million years, this fossil from Bexhill, England, was discovered more than a decade ago but only recently analysed. It was found to contain unfossilised protein fragments—brain tissue, fine capillaries, collagen structures, and the membrane that surrounds the brain. The authors attributed the brain tissue preservation to the highly acidic, low-oxygen environment in which it was found. However, such an acidic environment should have sped up rather than slowed the breaking down of brain tissue and protein.
How long can brain tissue last?

The existence of soft issue in fossils is hugely problematic to the idea that these fossils are millions of years old.

Believing proteins could last for tens of millions of years takes enormous faith. According to a report in the science journal The Biochemist, even if collagen were stored at 0°C, it would not be expected to last even three million years.8 But such is the power of the evolutionary paradigm that many choose to believe the seemingly impossible rather than accept the obvious implication, that the samples are not as old as they say.