An atheist activist group, Freedom From Religion Foundation (FFRF) is suing the federal government over the allegation that Department of Housing and Urban Development Secretary Ben Carson is “dodging records requests relating to a White House bible study.”

FFRF PRESS RELEASE: “According to reports, the Trump administration holds weekly bible study sessions at the White House. FFRF is seeking the records to determine whether or not the bible study uses government resources, whether staffers may feel coerced into organising or even participating in the religious event, and to ascertain government access granted to Capitol Ministries, a group that seeks to evangelise elected officials. 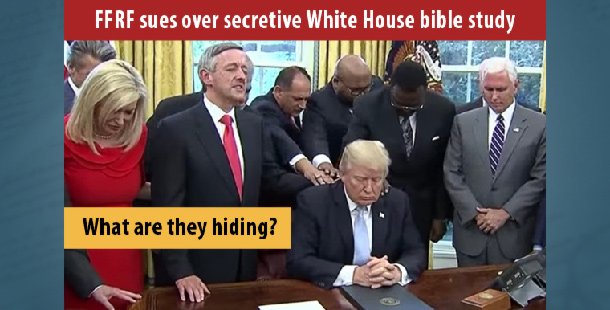 The Bible study is a rarity in government, and, according to Drollinger, a similar study among cabinet members potentially hasn’t happened in over a century. The weekly Bible study in question has been “making history.” Drollinger told CBN News in an interview last year that participants — some of the most powerful people in government — are “godly individuals that God has risen to a position of prominence in our culture.”

“[Jeff Sessions will] go out the same day I teach him something and I’ll see him do it on camera and I just think, ‘Wow, these guys are faithful, available and teachable and they’re at Bible study every week they’re in town,’” Drollinger said.

The Bible study, in particular, has been an area of interest for the FFRF due to the fact that Ralph Drollinger of Capitol Ministries, the man who leads it, has reportedly made controversial past statements about about Catholicism as well as women legislators.

He reportedly called Catholicism “one of the primary false religions of the world” and wrote the following about female politicos:

It is one thing for a mother to work out of her home while her children are in school. It is quite another matter to have children in the home and live away in Sacramento for four days a week. Whereas the former could be in keeping with the spirit of Proverbs 31, the latter is sinful.”