The waves of earthquakes are rocking the centre of the U.S. and the sudden awakening of several volcanoes around the world may be a sign of the pre-Messiah shake-up predicted by the prophets. At the same time, several far more mild earthquakes in Israel seem to embody the Biblical concept of God’s mercy being aroused by Man’s actions.

The earth seems to be waking up as seismic activity is being reported around the globe. Last month, a 6.5 magnitude earthquake shook Idaho, generating a multitude of avalanches. The quake was the largest in the region since a 6.9 quake hit in 1983. There have been 238 earthquakes in Idaho in the last week according to the U.S. Geological Survey website. Five of those have been substantial in size rating 4.0 to 6.5. Idaho isn’t new to experiencing earthquakes.

Two weeks before Idaho felt the earth move, Salt Lake City, Utah, approximately 340 miles away from the Idaho epicentre, was hit by a 5.7 magnitude earthquake. Since that earthquake, there have been 886 smaller earthquakes and aftershocks in the Salt Lake area. The belly of the country is clearly rumbling as the University of Utah Seismograph Station mapped a total of 980 tremors throughout Idaho, Utah and Wyoming since March 18 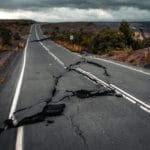 An article in Discover explained the epidemic of earthquakes as being caused by the continent “stretching,” a process described in German as “horst and graben.”

“As North America continues to stretch across the Basin and Range, these faults can generate earthquakes as the valleys continue to drop,” the article explained. “Both of the earthquakes that happened in Nevada and Utah recently were on one of the normal faults that bounded a valley.

VOLCANOES AROUND THE WORLD

But it is not just the central U.S. that is experiencing a seismic awakening. Since January 21, the Reykjanes peninsula in Iceland has experienced more than 8,000 earthquakes and about 10 centimetres of land uplift due to magma intrusions underground. Geologists believe the volcanic systems in the region become active about once every thousand years. The last time this region experienced volcanic activity was 800 years ago. Beginning in the tenth century, the volcanically volatile period lasted for 300 years.

The region is about 30 miles southwest of Reykjavik, Iceland’s capital, but is only nine miles away from Iceland’s international airport. A major eruption could shut down travel for all of Iceland as well as endanger the nearby town of Grindavik as well as the Blue Lagoon, a popular tourist destination. There is also a nearby geothermal power-plant which could be endangered by volcanic activity.

As if that wasn’t enough, the Krakatoa volcano in Indonesia exploded on Friday. Though two relatively small eruptions were recorded, the volcano is a hotspot and cause for concern. In 188, a Krakatoa eruption had one of the highest death tolls of any volcanic eruption, killing more than 36,000 people. The most recent eruption at the site was in 2018, generating a tsunami and killing 437 people.

Volcanoes are explicitly mentioned in the Bible as one of the “end times” signs as God shakes all that can be shaken as a wake up call that He exists and that He judges unrighteous nations.. The following Scripture reveals how God refines His own people.

And I will bring the third part through the fire and will refine them as silver is refined and will try them as gold is tried; they shall call on My name and I will answer them; I will say: ‘It is My people’ and they shall say: ‘Hashem is my God.’ Zechariah 13:9