I was reminded by this verse in Judges 6:1,  “And the children of Israel did evil in the sight of the Lord: and the Lord delivered them into the hand of Midian seven years“, just how often Israel was delivered by God into the hands of some foreign nation for judgement.
What about the church in our day? Is God delivering an apostate church into the hands of the enemy for judgement? God’s word reveals that there will be apostasy in the “last days” church  and that certainly is the case with many of the denominational churches compromising with the world’s values.
However, just as in the days Israel was delivered into the “hand of Midian”, God had his redemptive plan prepared and He chose Gideon a most unlikely candidate to achieve His purposes.
Who are the Gideon’s, God has chosen in our day?
When Gideon was called into action, Israel was in dire straits. Gideon had to winnow grain in secret just so the Midianites would not steal every little bit of food and sustenance from them. “Gideon threshed wheat by the winepress, to hide it from the Midianites.“ Judges 6:11(b) 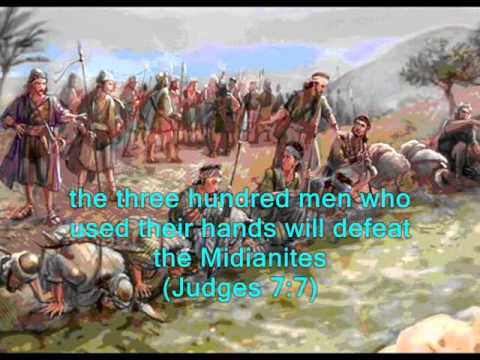 Just as Gideon winnowed the wheat from the chaff, God winnowed Gideon’s army. God winnowed down a fighting force from 32,000 to three hundred. Those who were “afraid and trembling” were asked to leave first.  Cowards go first in Revelation also.  22,000 departed leaving Gideon with just 10,000 now to fight 120,000…outnumbered 12 to 1. God still said, “The people are still too many; bring them down to the water and I will test them for you there.” Judges 7:4. God then rejected another 9,700 men with only THREE HUNDRED remaining. What a crazy story but we are meant to learn from it.

1. So we know, we can’t save ourselves.  “And the Lord said to Gideon, ‘The people who are with you are too many for Me to give the Midianites into their hands, lest Israel claim glory for itself against Me, saying, ‘My own hand has saved me.’ Judges 7:2

2. God wants us to develop our faith and trust in Him as did Gideon.  David is another great example. Listen to David, “The Lord is my strength and my shield; my heart trusted in Him, and I am helped; therefore my heart greatly rejoices, and with my song I will praise Him.” Proverbs 28:7  When your heart trusts in the Lord, you can expect help. God only needs 1 person to make 1,000 flee and 2 people to make 10,000 flee. It’s never been about “numbers” with God.

Who are the leaders in the church today who are bold and courageous, who understand that the battle is the Lords and numbers aren’t a problem? They are those who believe God’s inerrant Word,  know we are in the “end times”, know God’s call on their lives and get on with the job, trusting God for the outcome. We need to work with these anointed leaders, confident in our own role in God’s “end times” plan.
Let me name a few humble leaders that I have identified as Kingdom warriors who understand the times: Francis Chan, http://www.wearechurch.com; Torben Sondergaad, http://www.thelastreformation.com; Nelson Walters, http://www.gospelintheendtimes.com; Don Batten, http://www.creation.com; Joel Richardson, http://www.joelstrumpet.com; Alan Kurschner, http://www.alankurschner.com, Jeffrey Daly, http://www.dayofrepentance1.org