JERUSALEM, Israel – Driving along the route known as the Way of the Patriarchs in Samaria, the heart of biblical Israel, you’ll come to ancient Shiloh.

The Bible says this is the place where Joshua parcelled out the promised land to the 12 tribes of Israel. It’s also where the tabernacle of the Lord stood for more than 300 years.

Dr. Scott Stripling directs the excavations at Shiloh. Along with dozens of volunteers, he and his crew are digging into history.

“Welcome to ancient Shiloh,” Stripling greeted us. “This is the first capital of ancient Israel, and it’s a sacred spot because the Mishkan was here, the tabernacle, where people came to connect with God.” 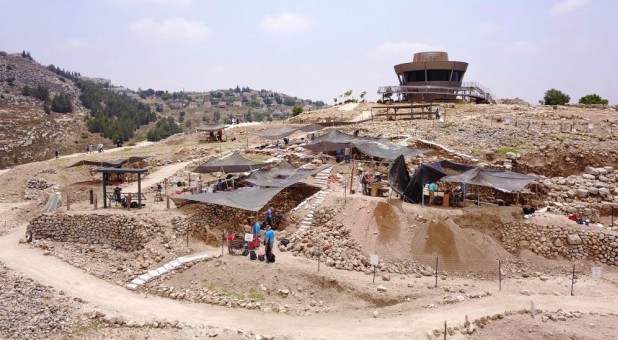 “We’re dealing with real people, real places, real events,” he continued. “This is not mythology. The coins that we excavated today—we’re talking about coins of Herod the Great, Pontius Pilate, Thestos, Felix, Agrippa the First, Agrippa the Second. The Bible talks about these people. We’ve got the image right here.”

That “image” includes a fortified wall built by the Canaanites. The team finds a treasure trove of artefacts there, which includes ancient coins and some 2,000 pieces of pottery a day.

Stripling said, “Archaeology doesn’t set out to prove or disprove the Bible. What we want to do is to illuminate the biblical text, the background of the text, so to set it in a real world culture to what we call verisimilitude,” he explained.

“So, we get an ancient literary description. Now, we have a material culture that matches that,” he continued. “Chris, you’re sitting where Samuel and Eli and Hannah and these people that we have read about, they came just like us, needing answers, needing to connect with God, needing forgiveness.”

Stripling says they dig into the past and find lessons for the present.

One of the faith lessons for us is that God is the potter and we are the clay. And even if our lives are broken like these vessels are, God told Jeremiah after He had told him to go to Shiloh and see what He had done, He told him to go to the potter’s house and look at a flawed vessel and see how the potter puts it back on the wheel and works out the imperfections. So my faith lesson is this: Yes we’re imperfect, but if we will allow God, He wants to put us [on] His potter’s wheel and make us a vessel of honour.”

“O Zion, your servants take delight in its stones and favour its dust.”

“For me this is sacred soil. This is where the Mishkan was that answers the most basic of all human questions: ‘How do I connect with God?’ And I think that’s their most basic question,” he said.

“I know I messed up. I know that God is holy. How do I bridge that gap when I sin against other people, when I sin against God. Ultimately, if the Bible is true, then the God of the Bible has a moral claim on our lives. And as we establish the veracity of the biblical text, I hope that everyone watching would just think about that – that God loves us and He has a moral claim on our lives.”