Four National Apostasies which guarantee that a nation will be judged by God.

If we are living in any “westernised” country today, we can clearly see that #’s 1, 2 and 3 ensures God’s judgement. 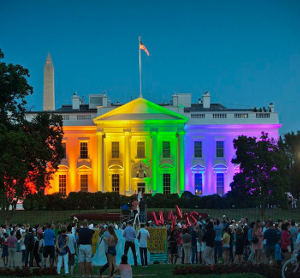 People gather in Lafayette Park to witness the White House being lit up in rainbow colors in commemoration of the Supreme Court’s ruling to legalize same-sex marriage Friday, June 26, 2015, in Washington. Gay and lesbian couples in Washington and across the nation are celebrating Friday’s ruling, which will put an end to same-sex marriage bans in the 14 states that still maintain them. (AP Photo/Pablo Martinez Monsivais)

The USA led the world in catastrophes last year. Racking up an overall damage cost of $16.5 billion, the devastating and deadly Camp Fire that ravaged California in November was the world’s costliest natural disaster in 2018. It was California’s deadliest on record with 86 fatalities. It stood out for its ferocity.

In second and third place last year were Hurricanes Michael ($16 billion) and Florence ($14 billion). Florence dumped heavy rain across the Carolina’s in September, and Michael tore into the Florida Panhandle in October. Michael, which had a wind speed of 155 mph at landfall, was the fourth-strongest hurricane on record to hit the USA. It reduced the small town of Mexico Beach, Florida, to rubble.