Celebration of passing the Same Sex Marriage bill in Parliament House Canberra yesterday. Labour’s Senate leader Penny Wong is the one standing in the picture on the left. She has a particular interest as she is in a lesbian relationship and she and her partner have two girls. On the right, Bill Shorten, Labour’s leader takes part in a March to support the YES VOTE. 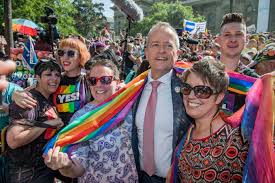 Sadly, most of these people live their lives as if God does not exist, certainly not the God of the Bible who tells us that   to fear God is the  beginning of wisdom. Proverbs 1:7  At this time, I am also reminded of what Jesus said,

“If you abide in my WORD, you are truly My disciples, and you will know the truth, and the truth will set you free.” John 8:31-32

God’s word also tells us, that “scoffers will come in the last days with scoffing, following their own sinful desires. They will say, “Where is the promise of His coming? For ever since the fathers fell asleep, all things are continuing as they were from the beginning of creation.” For they deliberately overlook this fact, that the heavens existed long ago, and the earth was formed out of water and through water by the word of God, and that by means of these the world that then existed was deluged with water and perished. But by the same word the heavens and earth that now exist are stored up for fire, being kept until the day of judgement and destruction of the ungodly.

The world no longer believes that God judged the world just four thousand years ago. Only eight human survivors of a worldwide flood and yet the evidence of billions of things buried quickly all over the world is stark and ample evidence.

Probably the greatest proof of the authenticity of the Bible is fulfilled prophecy. Over 300 prophecies of Jesus first coming is enough, but do you know that there are many more prophecies concerning His second coming and these are beginning to unfold in our time. One of the most significant is the prophecy of Israel being reborn as a nation and that God would bring Jews back to Israel from all around the world. This is happening at an increasing rate as we approach the last seven years before Jesus return – The 70th Week of Daniel.

Many of the recent posts on this website clearly demonstrate we are in the “last days”. Another, very significant sign given by Jesus, is that in the “last days” there would be apostasy in the church. A great falling away, as the church no longer stands on God’s Word, heeding sound doctrine. Abortion, same sex marriage, gender fluidity and euthanasia are four abominations in God’s sight which will bring God’s judgement on nations that approve of these sins. Australia now joins those other nations that are going down this path of destruction. Judgement of Sodom and Gomorrah was a real historical event but the scoffers are blind.